The Anatomy of a Small War Part 1

The Anatomy of a Small War: The Soviet-Japanese Struggle for Changkufeng/Khasan, 1938 by Alvin D Coox © 1977

“…in the midsummer of 1938 a desperate two-week’s battle, fought over and around Changkufeng between the Japanese 19th Division, stationed in north Korea, and somewhat larger Soviet ground forces with air support. The battle remained limited because both sides had good reason to avoid a full-scale war-The Japanese because of their unfolding conflict with China, the Russians because of the threatening situation in Europe.” Edwin O. Reischauer

I picked up this book years ago, either at a yard sale or a used book store. It was a discard from the London Public Libraries and over the Christmas holidays I started to read it. In the beginning of the border struggle (July 31, 1938) Mr. Coax has provided some very fine descriptions of small unit actions centred on the Changkufeng hills west of the Khasan Lake district.

Over the next two weeks the dispute developed so at the end on August 11th 1938 when the cease fire went into effect the Japanese had committed 12 Infantry Battalions and 33 Artillery Pieces, while the USSR had superiority in numbers. They had committed an 27 infantry battalions, a 100 pieces of artillery and only had about 20 tanks remaining on the front. During the previous two weeks, it was reported by the Japanese, that Soviet assults contained anywhere from 10-100 tanks at a time with air support. 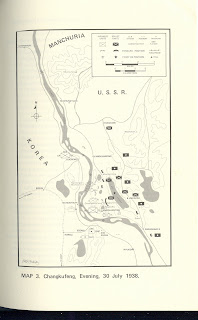 Map: Mounting the Assault Changkufeng, the evening of 30 July 1938

I realized early on in my reading that I must have had about 100 Platoon 20 Japanese Infantry figures that I had picked up years ago to use as “minions” for my pulp fiction, Daredevils’ Campaign. So last weekend I dug them out and sat down to get them painted. 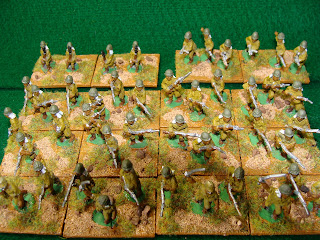 I have based them for the Blitzkrieg Commander rules but feel they are still acceptable to my old standby favorite, the WRG Rules for Armour and Infantry 1925-1950. I noticed last week on Ebay there was an auction of 6 packs of WW2 Japanese artillery  in 20mm scale and I was the successful bidder. I’m looking forwarding to adding that fire power to the infantry. 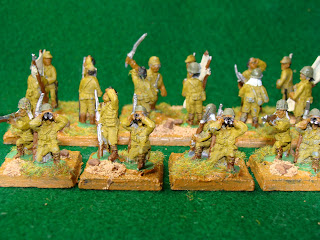 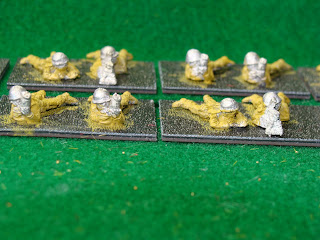 I still have 4 stands of 50mm mortors and 6 stands of two man light machine guns to finish. As with the infantry stands I am using a mix of paints. For the Japanese Uniforms I am utilizing the Vallejo Model Colour 923, Japanese Uniform Paint and 709234 Russian Uniform for the helmets.
All other paints for the figures are from The Games Workshop line. Gun metal, Snakeskin Leather (Flesh), Bestial Brown (wood for the rifles), Sand (Boots and Leggings) with a Brown Ink Wash.
The bases are a mix of Gale Force 9 for the FAO and HQ stands, while the infantry stands are 40mmx 30mm purchased from Robert Knestrick. He advertises his wares on EBay under the name of missiletoe. The bases are a laminated black plastic with heavy magnetic bottom. The thickness is 0.07” (heavy 1/16”). The cut is clean and accurate to .010”. If you are interested I can forward his contact information and the last price list I received from him.
The base terrain was be built up using Liquitex Natural Sand, and then will be painted with DeSerres Raw Sienna (Series 1 No 185) and flocked using Citadel Sand and Scorched Grass.
Posted by rhingley at 2:30 PM 2 comments: