This is the 2nd game run by David Redpath during the Cangames weekend. The 2nd Battalion of the 1st Canadian Infantry Brigade attack the outskirts of Fresnoy En Gohelle on the 3rd of May 1917.

The rules are based upon the classic Up-Front Game by Avalon Hill. It is my final action of the weekend. The Canadians are played by 4 players each with 5 cards in their hand. Cards allow movement, fire, rally etc. The Germans are played by Stephen St-John and myself. We each have a hand of 4 cards.  The hand size is reduced by one with every unit lost. The odds at the start are 20 cards to eight. Going to be an interesting day. 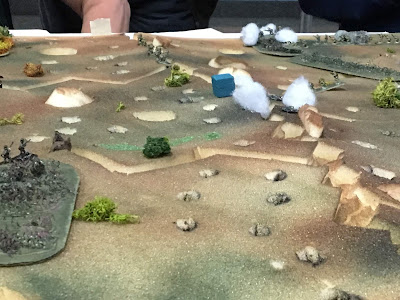 As the Germans we rolled and received 4 dugouts. All our troop locations were plotted on a map. As the programmed heavy fire rolled over us we rolled for damage. On the whole we were quite lucky with our rolls. Two of our dugouts were located by the Canadians at the start of the battle. One located in the middle of the front line, the 2nd near the middle of the third. Locations marked by green wooden blocks.

The Canadians pre-plotted their heavy barrage and their orders at the start of the game. Both sides had 20 mins to come up with their battle plans. The game flowed very quickly. Units are pinned if hit and cannot do anything unless they are rallied. Two pins and a unit is removed.

Terrain was made from camping/mattress foam. Trenches are cut in and shell holes created. Spray paints used to colour the terrain. An extremely effective method of creating the battlefield that is easily rolled up.

The Canadians end the game in the German forward trenches. Both Stephen and I are deduced to one card each. I was responsible for our right flank and had reduced one Canadian player (sorry Stan) to zero cards and the 2nd facing me had two cards remaining.   Things were not going as well on the left flank. These results somewhat mimic the historical results. One of the Canadian flanks became bogged down, while the other went on to reach their objectives.

The Germans were declared winners, based upon casualties inflected and objectives denied the Canadians. I had a good time this year in Ottawa, having been on the winning team in each game I played. The dice were good to me. It was a far cry from last year.

Sunday arrives far too early for my liking. My body ached all over. One more night until I get home to my own bed. I have signed up for a 9:00 AM game being run by David Redpath.

I was given the mobile ground radar set to run. The rule set was a WW2 variant of Dave's Bandit Rules. Combat is initiated when two opposing units (circles with planes) touch each other. Visibility is limited, so units must follow a pre-plotted course until they have spotted something or they receive a message.

Units must move toward a way point (wooded blocks). As radar I could adjust the location of one RAF any turn the radar worked and was successful at picking up a target. Units had two blocks but had to reach one location before going to the second.

Fighters may place a block on an enemy unit once they sighted it, thus allowing them to pursue it. Radar wasn't that finely developed so I couldn't tag an enemy unit. The allies won the battle due to the large number of German bombers shot down.

I'm getting too old to spend 12 hours plus standing around tables on the concrete floor of a curling rink. My knees can't take the strain.  The last couple of years at Cangames I've only been getting two games in a day. The third session is usually taken by a much needed break for a meal with friends, some possible shopping or sightseeing or god forbid, an afternoon nap.

Saturday I skipped the 2:00 to 6:00 PM gaming session and returned for an introduction (for me) game of Frostgrave. I noticed that it seems to have a popular following and I did not partake last year. It was chance to get my feet wet. The game was run by Tod Creasey of the Ottawa Miniature Group (OMG).

In Ironboots and the Shieldmaiden's Secret, we were divided into two teams. I was assigned to the pit of hell, I mean the evil side, and as I was last on the sign up sheet I received the final available character on our side.

A third level illusionist with four spells. None of a direct combat nature. I was also assigned 3 minions, a thief, a treasure hunter and a marksman to do my nefarious deeds. Due to the large number of players we were not able to delve into their particular skills, other than my markman had a bonus in archery combat, and my treasure hunter had a plus in hand to hand melee.

The game was get in, loot the place, kill the enemy and get off the board. Three turns in a roll  I tried to use my teleport spell, only to roll a one on each try, taking damage in the process. When the game ended I was on the side which won, was one of two MUs still alive on the board, but I scored a mere 10 points. The lowest in the game. One of my minions killed an enemy minion. Back to the apartment for a late night drink.
Posted by rhingley at 9:22 PM No comments:

9:00 AM - Main Floor. It's show time and Time Tripper makes its debut. In July 2006 while on operations in Kandahar province a fire team of 1 PPCLI became separated from the main group. In an intense firefight their radio was damaged. The Canadians were able to take cover in a small walled  enclosure and began to weigh their options.

A search of partially collapsed buildings revealed a collection of old Soviet equipment dating from their doomed occupation of the land. The local villagers threw nothing away. Zapper Smith, the intrepid radio tech thought he might be able to pull something together.  As the Taliban initiated their next assault, the radio commence to sound static and their was a sudden blue flash. After the flash dissipated, it was clear, as it was with Dorothy when she said, "Toto, I've a feeling we're not in Kansas anymore."

I ran one table, with the able assistance of Mike  and Les the other, with Paul as his assistant. The important thing was not allow the game to bog down. Each table had 4 Trippers and we were equipped to handle a total of 11 players if need be. I only had time to photograph what was happening at my table.

The first scenario ran over an hour as we introduced the players to the concepts of the game. By the fifth round we were completing a scenario in just 20 minutes. The 2nd round I have no photos. The third game our players found most enjoyable. It was listed in the original Time Tripper game as a Dragon Lord, but I used a large dragon. Mike by now was starting to issue nicknames to the players. After this round, one was called Crispy and another simply, Dragon-Slayer. A third was known as "Loot not Shoot". 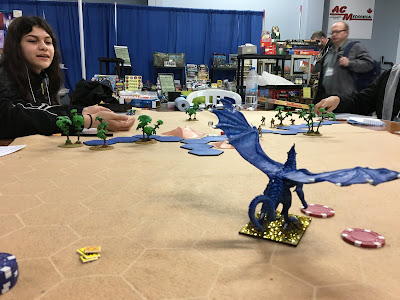 The fourth game was the hardest on my set of Trippers. The Trippers were up against a dozen German soldiers in the Battle of Falaise Gap. A sniper was particularly effective. All four Trippers died.

The 5th and final round of the game was set outside a Japanese tea house as 8 or 10 drunken samurai and ronin stumbled about in the dark. Easy pickings for the Trippers. Points were awarded for treasure (artifacts, ancient weapons, ancient coins, katanas or even a dragon scale or tooth, etc)  collected minus number of deaths. Due to the nature of time you really didn't die. You just waited to join your comrades in the time stream on your collective journey.

On a side note the award for Outstanding Improvement to a Boardgame went to the team.

Tripping at the 2nd Table. A few photos of action at table two. 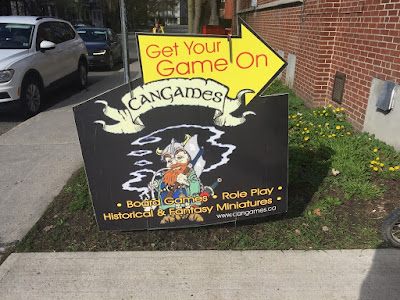 CANGAMES arrived early this year. The Victoria Day weekend is celebrated on the 3rd Monday in May and it meant an early start to this year's edition of friendly mayhem. Fellow members of the Atlantic Simulations Society drove up from Halifax and passed through Montreal to collect me. We arrived early enough for a lunch and then proceeded to register at the desk.  Our chariot can be seen just parked on the roadside above and to the left of the sign.

This year we as a group decided to run a game at the con and chose to modify the SPI Time Tripper Game by James Dunnigan and run it as a tabletop miniature games and added Canadian flavour by having the heroes in question a squad of the Princess Patrica's Canadian Light Infantry in Afghanistan who have become unstuck and having to make their way home through time and space. Planning began after Christmas and play testing commenced in early April. 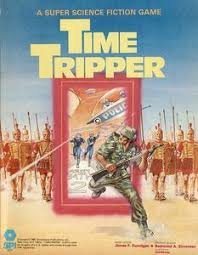 By the end of the first week of May we were ready. Most of the grunt work was completed by Paul Smith and Les Howie in Halifax with Mike Haynes helping out with play testing. Contributions were also made by Stephen Newberg and Anthony Ess. I was to ref one of two tables on Saturday morning so this was my first run through. 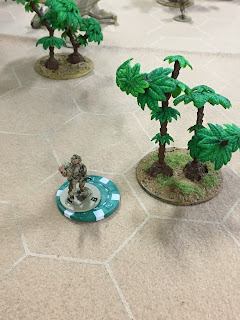 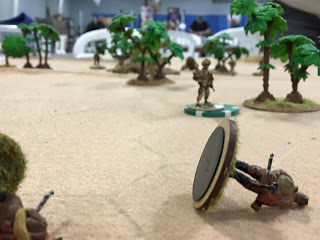 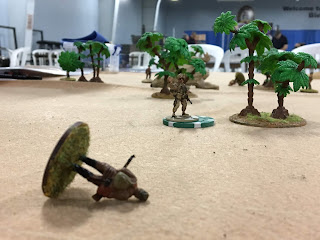 Friday evening at 7:00 PM three of our group  signed up to take part in Michael Ball's Face of Battle game. This year the scenario was "Stopping the Panzers". On D+2 elements of the 12th SS try to throw the Regina Rifles back and crush Operation Overlord in it's tracks.  Anthony and I were with the Canadians and Paul assigned to the Germans. It was a close game. The Canadian almost completed the 3rd of their 5 objectives. The Germans only one, so the game went to the Canadians.

Posted by rhingley at 5:35 PM No comments: