Last year when I flew down east (Montreal to Halifax) for my summer vacation I was asked to bring along my 15mm HOTT Undead army. They would see action. It was the first army that I rebased with magnetic bases, but this trip would show that the product used  was not up to the task. Those bases were composites composed of a magnetic bottom layer and a thin cardboard top layer.The heavier miniatures glued to the cardboard, separated from the base when my luggage was handled by the cargo crew. They pulled off the cardboard layer. 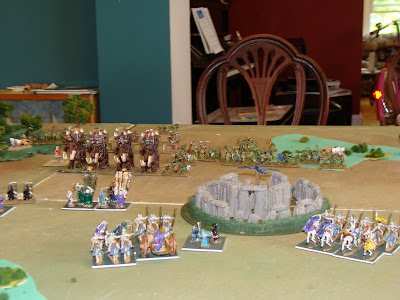 15mm Undead (Old Style Bases) vs Goblins
Battle over Sacred Site
July 2010 Halifax
I resolved to rebase the army and I managed it in two steps. I placed an order for some figures from Peter Pig and at the same time I ordered pre-cut plastic bases. I already had a supply of Litko self adhesive magnetic bases that I would attach to the plasticard bases. I do not trust the self adhesive tape to hold so I used super glue to insure a solid  fix.

I purchased the beginnings of this army from Irregular Miniatures in the early to mid 1990s.Other figures, mainly characters, were added. Some were 25mm scale but they served a purpose. Additional units were built from the Ral Partha 15mm line of figures produced for the AD&D Battle System. The final group of figures used to build this force are Black Raven Undead units.

Three weeks ago between painting my Nikaian Byzantine DBA army and my Burgundian Ordonnance DBA army I took the time to finish my undead basing project. Last winter I had already taken the time to remove the figures from their old bases and glue them to their new ones. I only had to texture paint and flock the new bases. The end result is my large collection of undead. I am not content to use just the suggested Undead Army list  available in the HOTT rules but have incorporated almost every troop variant available.I am still looking for a suitable undead dragon to add to this army. 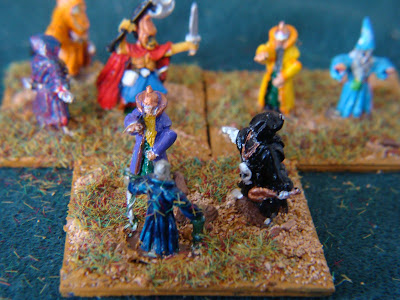 2) Sneakers ( Three Elements) All by Irregular Miniatures @ 3 AP Each 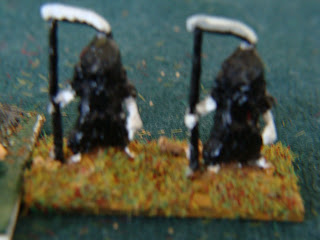 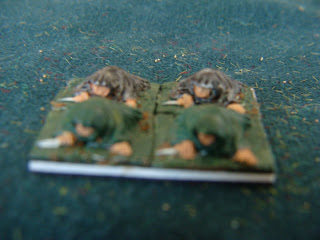 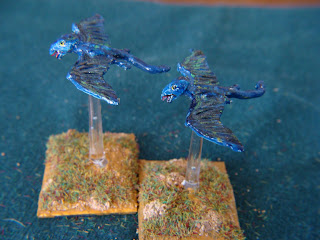 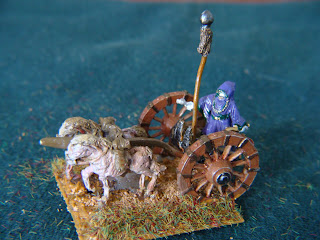 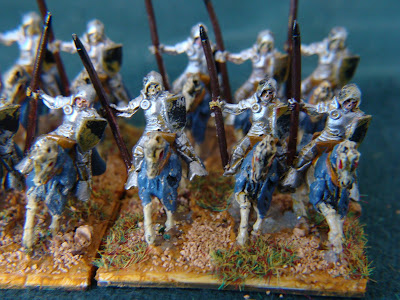 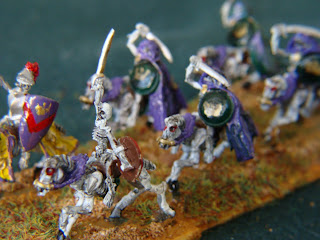 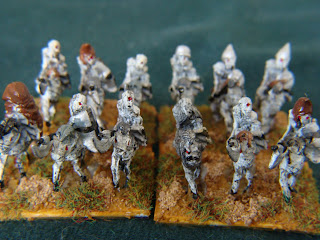 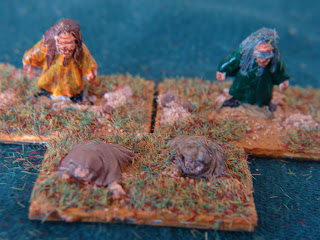 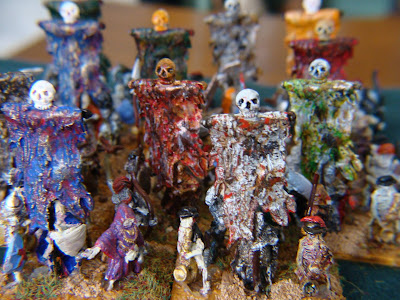 The Following Troop Types are not on the HOTT Generic Undead Army Lists but I feel that if you read enough stories or watch enough movies, you will find that these troop types are available to certain dark forces.
1) Irregular Miniatures Undead Artillery (Two Elements) @ 3 AP Each. My friend Les, once commented  that these guns are what the Aztecs would have produced if they invented canons. 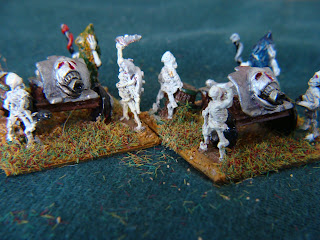 2) Undead Heros or Anti-Heros . Even the Forces of Darkness have their champions. Two Elements @ 4AP Each.
These are two of my favorite figures. Both are 25mm. One was a Ral Partha (or RAFM) Figure sold as an Undead Adventurer. The 2nd is an unknown make but is a Dwarf, who heart has been ripped out. I was referred to as a sick twisted ba***rd for having adding that figure to my army. Needless to say that complement was bestowed upon me by a Dwarf fan. 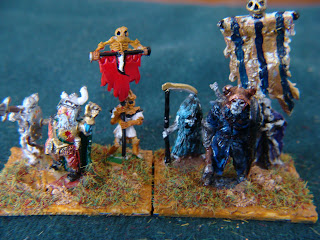 3) Undead Behemoths (Two Elements) @ 4AP Each. Again these figures were 25mm figures that I felt would fit in nicely with a 15mm Army. The figure on the left is of a Ral Partha (or RAFM) Undead Japanese Ogre. I do not know what the 2nd figure is, nor do I do not know the maker of the figure. 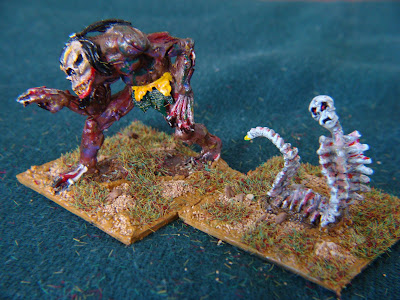 This army is totally separate from the Undead Army I have previously blogged about.  This was the original Force of Darkness, in 15mm. The other army consists of 15mm figures on the 25mm HOTT base widths in order to obtain a massive looking army. The Irregular Miniature Undead figures are the oldest presented here. They are rather crude when compared to either the Ral Partha ADD Battlesystem Line or the Black Raven Figures that are shown, such as the Undead Dwarf Anti-Hero standard bearer.

The Irregular Figures of this age are soft and malleable. Because they are skeletons they break off at the legs very easily. I prefer not to use the Irregular Riders for this reason. Some of the figures are in danger of snapping off the stands, as are a number of the Horde Infantry. The Irregular Miniature standard bearers are extremely robust and I advise people using this army to use them to move the horde elements.

This army can still use more troops but in total I can field 85 AP worth of Undead with the figures above. 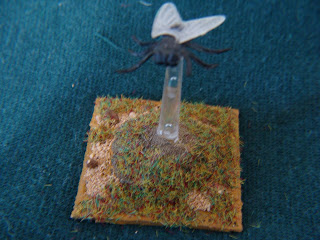 The Price of Failure.
Posted by rhingley at 12:51 AM 3 comments: 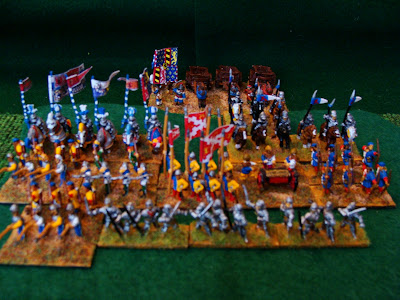 Army with all options shown.
As previously blogged last year I fielded a Burgundian Ordonnance army at Cangames. It was a hodge-podge collection of miniatures that were selected from various fantasy and renaissance units about an hour before I headed to the train station. In spite of having more than enough time, I failed to plan ahead. I flipped open the DBA rulebook and browsed for something that I could throw together in 15mm scale.  My object was to avoid the armies that I used in previous years. And that was how the army of Charles the Bold went to Ottawa.
I decided that I will bring the Burgundian Ordonnance army to Ottawa again, but it would have to be a totally dedicated force. I found some figures that I had not painted in my collection of renaissance lead, that would work for the period and the remaining were ordered from Essex Miniatures. The past two weeks were spent in preparation.
I am not content to just paint an element, I feel the deep desire to field units. The photo above shows all the elements of this DBA army, but the following photographs are the entire body of troops I painted. The primary colours for the Burgundians were Blue and White. Infantry were to wear a Blue and White surcoat  along with a red Saint Andrew cross  for identification. Knights were encouraged to use Blue and White for the feathers worn in their helms or on their horses. I have tried to incorporate these guidelines to some degree with my figures. I was not happy with my attempts to paint a small clear St. Andrew's cross and as a result painted over most of them. I just could not get a thin steady line that I was happy with. 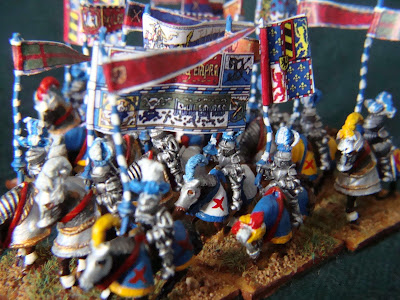 1x3 Kn (Gen) and 1x 3Kn
When I searched through my collection I discovered I had 15 gendarmes without horses. I wrote to Essex Miniatures and they were very happy to provide me 6 horses, without riders for the same price of a regular package of figures. I asked for a 3 package mix of the horses used for MER52 and MER53. Enough horses to provide me with 5 elements of knights. Banners and Flags are by Warflag. These accessories help bring this unit to life. The General Element bears the banner of an ordonnace company. 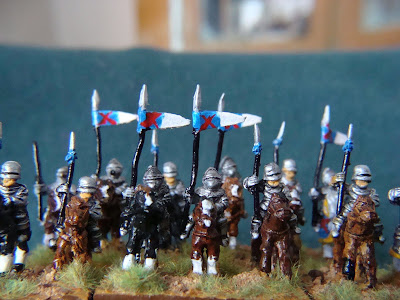 3x 3Kn//4Bd (Mounted)
The army list includes 3 Elements of knights that can fight dismounted. Instead of using the same figures as the General and a second gendarme element I found I had another 16 figures in plate armour bearing a lance. Their horses did not have barding or caparison. From their squat appearance I labeled them as Mike's Models. I know that the Mike's line was purchased by Essex Miniatures in the late 1980s and these figures could have been produced by Essex Miniatures after their take over.

I painted 8 elements of men-at-arms. They have the same general appearance of the knights above and provide the needed 4 man Blades Elements. This unit (or two units) was built from 4 packs of Essex MER36 (Dismounted Knights). 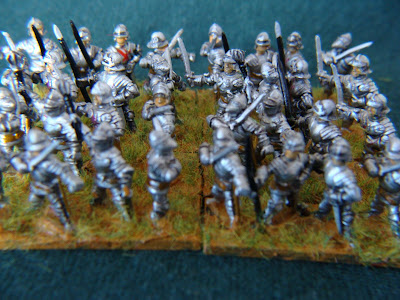 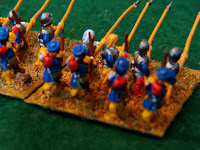 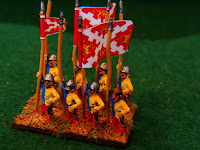 2x 4Pk or 8Bw
The two elements of pike (MER40 and MER41) may be replaced by two elements of 8 Bow. These double element units were an innovation of Charles the Bold and are represented by 4 pike placed in front of 4 archers on a 40mm x 40mm base. I tried to keep to the Blue and White colour scheme but added some red and yellows to add some variety. 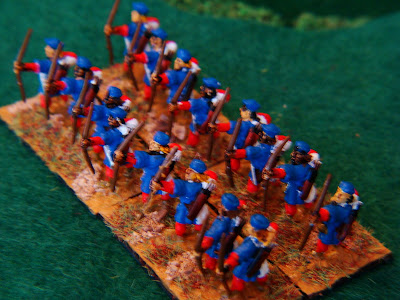 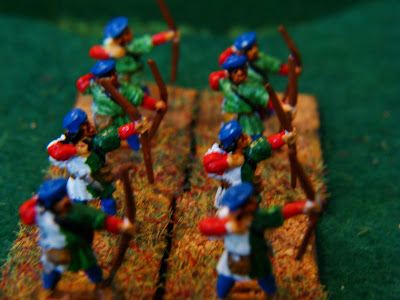 1x 2Ps
The archers which were used for the 8Bw elements and the 4LB and the 2P are all from the same set. MER84 provides two main figures and I had 4 packs. One was used to make 4 elements of 2 man Psiloi, one for the two elements of 8 man Bow and two for 4 elements of 4 man Long Bow. 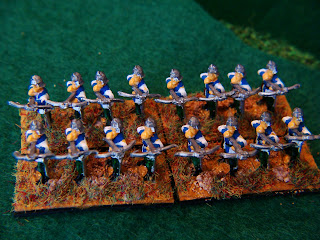 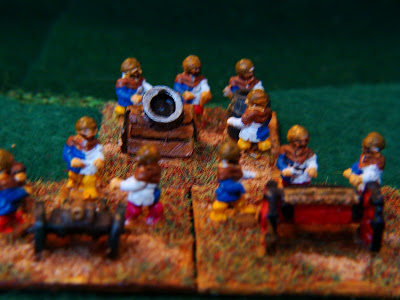 1xArt
I already had the artillery train, but I had to paint crew figures. I found 11 figures that had the appearance of  the Mike's Model line.  It is possible they were some form of Squat Football Team, but I drafted them for the Bleu et Blanc.
To complete the army list I needed a camp. An assembled supply train with escort fulfills this function. 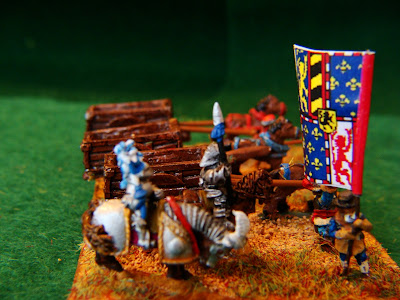 As I stated I was not content to just paint one DBA army. The figures here allow me to field close to two and a half armies for a Big DBA game. With other figures I already I can easily field the 36 elements needed. Just to be safe I'll just have to pick up a few more packages of pikemen next weekend at Cangames.
Posted by rhingley at 9:52 PM 4 comments:

What's on the work table

Work has progressed slower than expected. I hoped that I would be posting the final product today. Instead I must just leave you with just a taste of what's to come. 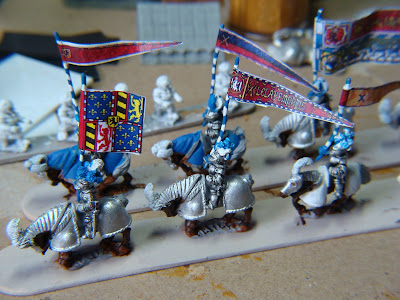 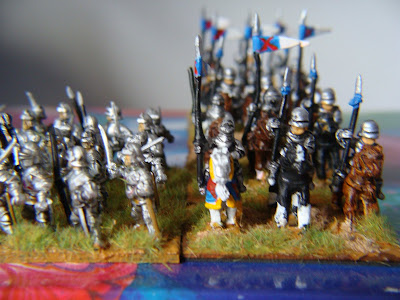