My Roman Army continues to grow. I remember the first sets of Scorpions that I painted in the mid 1970s by Heritage Miniatures. I think back now to how primitive the figures looked compared to the lines that are available today. However they easily served 30 years with the Army before they were retired.


Warlord Games
As I've blogged before, Librairie Donjon, a gaming shop in Montreal, brought in a number of packs of miniatures by Warlord Games. I thought it a fine opportunity to check out the quality of the figures, and at a great price. I paid in the realm of 40-60% to what the cost would have been to have ordered the figures directly.

Warlord Games offers a Roman War Machine Boxed Set. This consists of a large metal Ballista with crew and 2 metal Scorpions with crew.  I stress metal here, because Warlord Games also produce plastics, but so far not for this set. 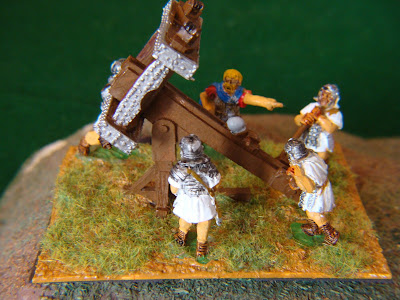 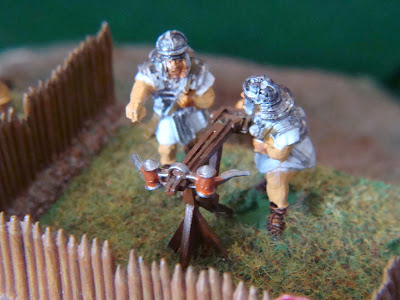 Warlord Games Scorpion and Crew
One of the problems that I had with the DBA rule set was the base depth required by Scorpions and crew. Eighty millimeters was too much for my liking. Under the WRG 6th and 7th edition rules the depth of artillery was a minimum of 40mm to whatever was necessary to base the models. Thus I have decided to base the Scorpions on a 40mm deep base for WRG. I have another two Scorpions by Foundry that are situated on the 80mm deep elements. As you can see by the photos the 80mm depth works fine for the Ballista and below for the catapults. 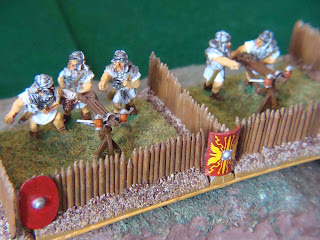 Warlord Games Scorpions with Crew in Fortified Hilltop Camp
I chose to photograph the Scorpions on a fortified hill top. The hill was constructed by my friend Les, and came into my procession years ago. The pallisade is by Old Glory (OGSE-08), each set contains 2 styles of wooden stockades. In total 10 pieces, 5 of each style. I based 5 pieces of one style to give a fortified camp space. Each section of the camp can provide shelter to a 60mm x 40mm element. I placed some extra shields to cover the gaps. The stockade is straight and does not contain corner pieces.

The next unit is by Black Tree Designs. It is the IA1205 Onager (or Catapult) with Crew. Their website currently shows just two crew figures with the weapon but when I made my purchase I am sure that it came with three figures. It is delicate and I had problems attaching the sling at the end of the arm and ended up cutting some tin from a wine bottle to make one that works for me. 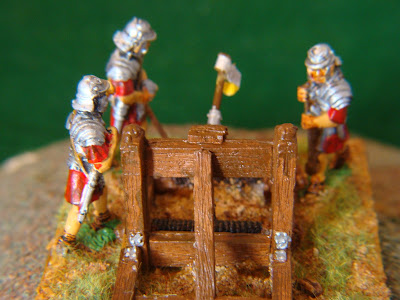 Black Tree Design IA1205 Onager and Crew
The final two pieces are a Onager by Old Glory ( OGSE-04 Stone Thrower (popularly known as a catapult)) and a large Ballista. I do not know the company that produced this piece. Note: I had the same problem with the sling at the end of the throwing arm of the Old Glory Onager as I did with the piece by Black Tree Designs. 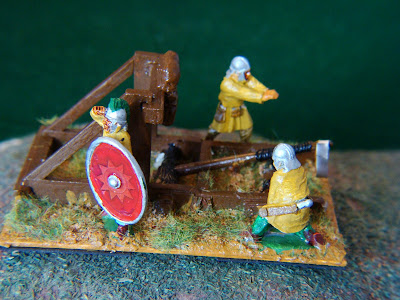 Old Glory Onager( OGSE-04)
The crew figures are Late Romans by Old Glory. I believe they came in a pack of PLR-12 (4 Ballistas with Crews). I still have the Ballista/Scorpions and I have ordered additional crew figures from Black Tree Design. When I wrote to John at Black Tree he replied that  they'd cast up some figures on the side and let me know when they were ready. He estimated the cost at $1.50 a figure and they should be available in two weeks.. 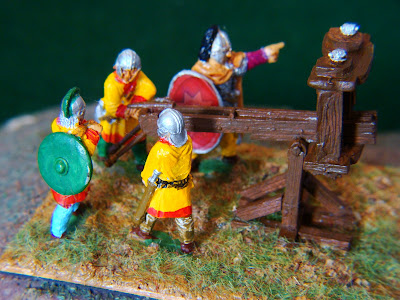 It has been just over six years since my friend Jef Lauzon passed away on October 27, 2004.

Over the years I leant a lot about the WRG 6th edition Ancient rules playing against him. I never manged to beat him at WRG, but I kept going back to play. Two summers ago, Annette, his widow, decided it was time to pass along some of his figures and I received a large collection of  mostly 25mm Roman and Greek figures. She keep the Forces of Darkness, and both his sons Dru and Chris selected the armies they wanted. i don't know how many times I clashed with Jef's Roman Legions, but I was extremely touched to have been selected to provide them a home. 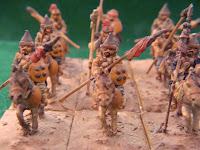 In the box was a 18 man light cavalry unit that I always admired. I think that Jef told me that it was a unit that he won at the Origins Gaming Convention taking part in the WRG North American Ancients tournament sometime in the early 1980s. I don't know who painted them but I always liked the dusty look to them and I think they were the first  figures I saw painted with acrylites. 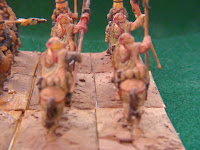 The only work I did on these figures was to base the single figures on to two man elements. No other work was necessary, but I ended up with a  nine element DBA army.  It had been on the back of my mind for a while that I would have to increase this to twelve elements. I ended up finding some Essex Mongol cavalry for sale on an Ebay store website (The Last Nazgul).

Two units of seven figures were available and I purchased both at a very reasonable price and the postal service from the UK rocks.

Looking at the DBA rules army IV/35 Mongol Conquest leaps out. I needed just 3 x 3CV and 1 Art to complete the horde and the 14 Essex figures I purchased fit the bill. I can always use a piece of Roman Siege Equipment as the Mongol Art. 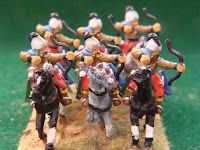 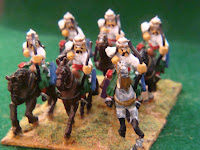 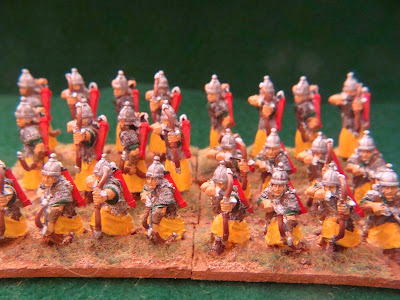 As I've blogged before, Librairie Donjon, a gaming shop in Montreal, brought in a number of packages of miniatures by Warlord Games. I thought it a fine opportunity to check out the quality of the figures. My army already contained two units of Eastern Aux Archers (figures by Old Glory) but I was impressed by the quality of the Warlord Games' Western Roman Archer Figures so I purchased a box of 16 Eastern Imperial Archers. As in those figures you receive four different poses and the figures are very easy to paint. 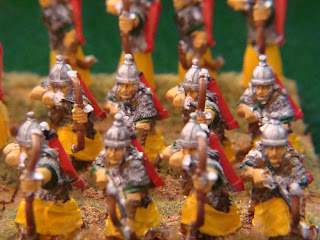 Close-up of Warlord Games Eastern Roman Archers
I picked up another two packs four man packs on Ebay and sold one of my 16 man Old Glory Eastern Archer. The Old Glory Figures are chunkier, and come in one static pose. 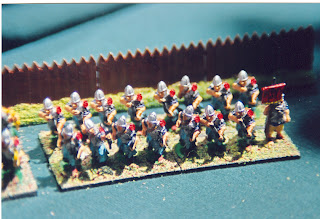 The Roman Testudo (tortoise) formation is probably the most recognisable battle formation in history. According to Wikipedia the testudo was commonly used by the Roman Legions during battles, particularly sieges. The Greek term for this formation is "chelone" and during the Byzantine era, it seems to have evolved to what military manuals of the era call the "foulkon" 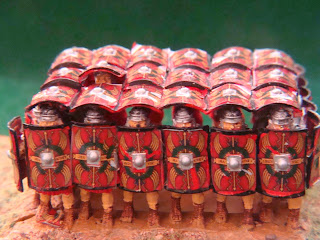 Testudo Front View
The Testudo kit by Warlord Games is made of polyurethane resin and comes in 6 interlocking parts: front, back, 2 sides, roof and a single shield and head for the Legionary who just can't help but take a peek (2nd Rank 2nd File)!

Decals are by Little Big Men Studios Transfers and were include in the kit. I was disappointed with their waterslide shield transfers. They are not as robust as their regular decals and even though they include extras by the time I was done I was short 4 shield decals. Perhaps I am all thumbs or have a higher learning curve but I did find them rather fragile. 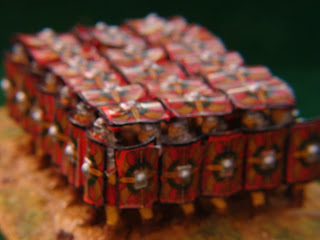 Testudo Side View
The kit was fairly easy to paint and I spent about 5 hours in total on it. The application of the decals took an additional hour.

The big question for me was how to base this unit. Generally I run my Romans in units of four blade elements or 16 figures. Counting the exposed shields the Testudo by Warlord Games portrays 34 figures but the figures are in six rows of six or 36 figures, but there are none in the centre to paint. So I decided to base the kit on the area represented by the space occuplied by a eight WRG Blade elements, in two columns of four. This worked out to a base with a frontage of 120mm and a depth of 80mm. 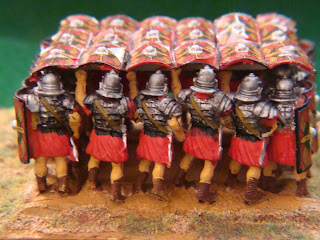 Testudo Rear View (Flap on 2nd shield from the left is glare from the decal)
Afterwards I went to the Warlord games website and placed an order for another sheet of decals. The minimum mail order is 10 pounds so I also selected a set of plastic tents (new releases- terrain) pictured below with a 25mm figure for scale. 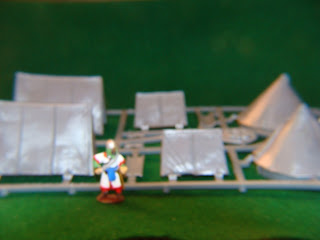 The set includes two "pup tents", two large tents, and two Bell tents along with a campfire and stretchers. Warlord games continued its free postage for October mail orders, as I placed my order last weekend and I received the package this past Friday. just a week from the UK to Montreal. I call that excellent service.
Posted by rhingley at 12:59 PM No comments: