The Captain's Retreat - A Gentleman's War

Once again I benefit from having access to the ocean side cottage courtesy of a generous friend, and was in position to host some long time gaming buddies to a two day "retreat". As usual Ross Mac (Battle Game of the Month) stepped up to the plate and offered to run a game. He decided to introduce us to Howard Whitehouse's ruleset, "A Gentleman's War".

The scenario that Ross had in mind, was based upon the Battle of Ridgeway, June 1866. Troops were all 54mm figures from his collection.


Les and I represented the Fenian Brotherhood. Our force consisted of a unit of French-Irish Canadians, some recent Irish immigrates to the United States, but the majority of our troops were Irish veterans of the US Civil War.  Between us we had 6 units of Infantry (8 figures each) and one unit of Cavalry (4 figures) and one Artillery piece with crew. Our plan was to deny the right flank. Les would anchor our defenses upon a hill with our artillery and a unit of infantry on either flank. 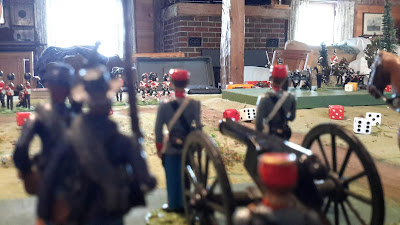 I would assault the village on the left with the remaining infantry units. I also took the cavalry in order to flank the town. I choose to keep one Infantry unit off board as a reserve. We had to inform the ref where it would enter, and to our surprise it kept the Canadian Militia units troops on our right flank holding their position in case it came storming out of the woods on the right edge of the table.

The Canadian militia commanded by Paul Smith and Stephen St-John  were two near equal forces from the colonies, formerly known as Upper and Lower Canada. Since Confederation these are now the provinces of Ontario and Quebec. Both of the Canadian commanders had 3 companies of Infantry (8 figures each). The Lower Canada units were all from Montreal and included a unit of artillery and deployed on our right. The Upper Canadians provided the Cavalry (4 figures) and faced me. The Canadians deployed on their entire length of the table.

The cavalry of both sides quickly closed. There was an option to dismount, but neither Stephen nor I choose it. In our 2nd clash I came out the worst and had to flee my movement distance (5D6, my roll was 29 or 29 inches). I was off the table and out of the fight. Other than that misadventure my battle plan developed as I had hoped.
I advanced my infantry in line, three units abreast towards the town. Stephen rushed forward two units in column in order to seize the structures. I felt I would lose a race for the town, as it was closer to the Canadian side of the table. Thus I advanced in battle formation. I held the 4th infantry off board until needed. When it was, I rolled 3 ones, and it entered in column onto the table 3 inches

It was my first time playing this game and decided I would close assault the structure on the left, and engage the other with two of my infantry units. I lost the close assault and had to retreat 2D6 (7 inches) just outside close range. Here I stood and repulsed the follow-up moves by the enemy cavalry. 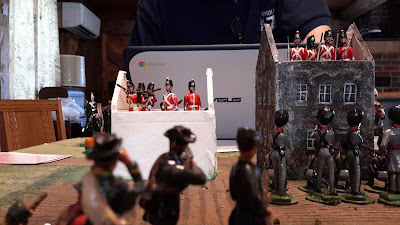 The Battle develops and the fighting becomes hot and heavy. The camera is put aside.  The Lower Canadians hold onto their hilltop, waiting to engage any Fenians who force march out of the woods. They have been kept out of the battle and when they begin to advance. It has come too late.

The struggle for the town has been decided. The  Upper Canadians try to help their besieged brethren, but to no avail. The three Upper Canadian units of foot have ceased to be effective.


The game ends. Paul has left in order to prepare his fabulous ribs. We had a late start due to the replacement of a fireplace stove, and after dinner the evening drifted into conversation and drinks. We would have to wait until tomorrow for another clash of figures.
Posted by rhingley at 8:31 AM