I had another two GHQ WW2 tank battalions to paint. This was a very quick job in the late fall before the temperature starting reaching below 10C during the day. I sprayed painted them using a can of War Paint (Flames of War) Soviet Armour SP02. I found the product provided a nice easy coat if the instruction were followed. After they dried I applied a wash of transparent burnt umber by Liquitex (Series 2 No 130). I found this to be a very quick way method to get the units ready for battle. 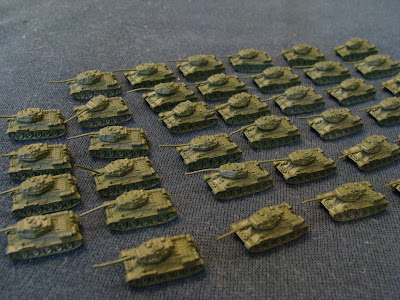 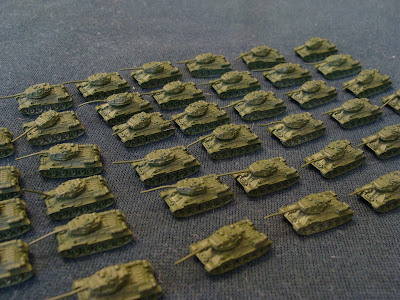 Over the holidays I could travel with one army. I asked my host which one should I bring. Joseph wanted to do a large battle HOTT. I have two 15mm Undead armies; one being mounted on 40 mm frontage bases, and the second on 60 mm frontage.

His plan was to use 4 regular Elements, mounted on a movement tray as one giant element. I had both 40mm and 60 mm figures, so I figured that we'd work something out. I started to base 15mm figures on a 25 mm frontage a few years ago, as I wanted to see what the effect would look like. In total I am able to field three separate 15mm (40mm frontage) Undead armies.

The second army was far from complete and I knew that we'd have at least a week between my arrival and the day before we could do battle. I would use the time to get the rest of my figures painted (16 cavalry and 160 infantry) Most of the figures are by Black Raven. This would provide me with enough figures to field two complete Undead HOTT armies using 60 mm bases. As it turned out, the miniatures never made it to the table. Instead we took part in an all day 6 player game of Twilight Imperium. 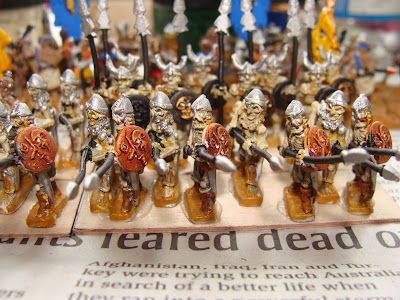 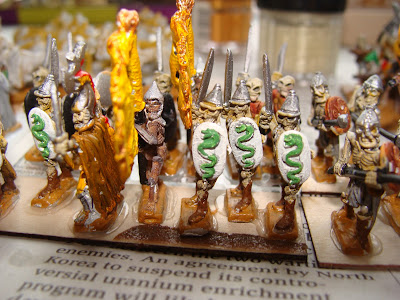 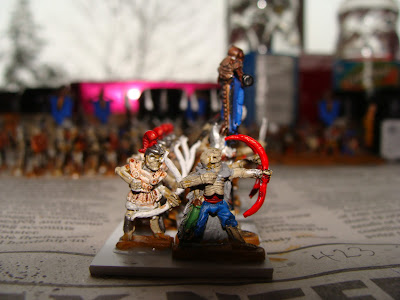 The above photos were taken on the work bench in my room at the Lappin's. Before I left Halifax all the figures were painted and the bases were flocked. I have one more step to complete. I have read a lot lately about the army painting system and it has been suggested on some forums that Minwax wood stain would also do the job. I picked up a can of the English Oak water-bases wood stain at Micael's. 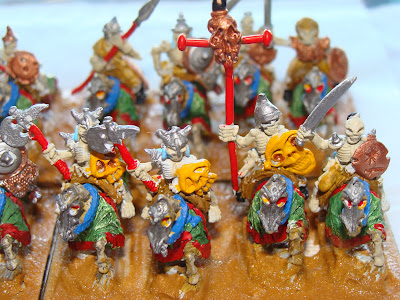 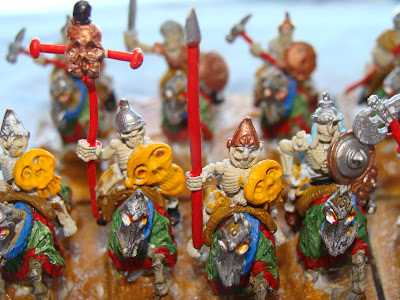 As you can see these figures are in need of a wash or a dip. Due to the width of the Black Raven figures I have never been able to fit 6 on a 60mm base.I hope to try out the wood stain at some point this week. I will then post images of the completed army.
Posted by rhingley at 12:50 PM No comments:

When I last blogged in August I wrote that I had some officers and troopers to paint to finish the British Colonial Lancers. I got distracted and decided to paint this bag of what I think were sold on eBay about 5 years ago as Old Glory, dismounted cavalry. There were a total of 30 figures to paint. I decided that in keeping with my interest in Space:1889 I'd photograph them on the red gaming mat. 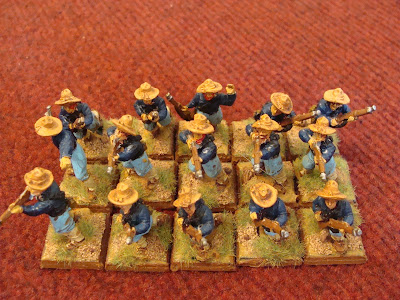 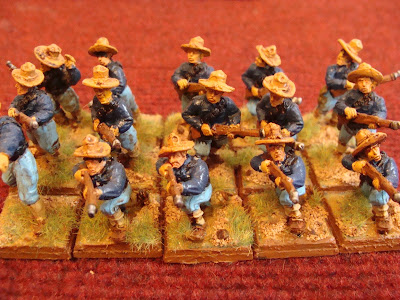 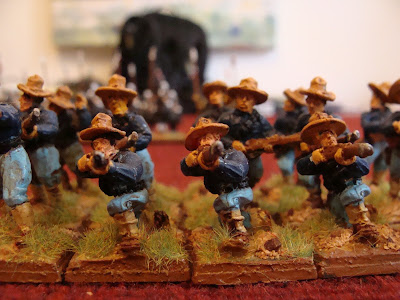 Note : In the third photo you can see the Lancers in the background.

On the Workbench: Colonial Lancers Vol 2

Since August of last year, my concentrations have been on my studies. I did work on some miniatures, but I have not had the time to blog. I completed my internship on Friday and will receive my complete my program on Tuesday. I will now try to catch up on the blog. 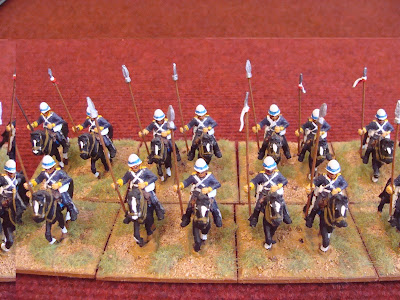 Shortly after my last post on the Colonial Lancers, the bases I was waiting for arrived. I based two figures per stand, while I kept a few single stands in order to be able to remove causalities. The photos were taken on my red gaming mat. I am thinking of joining the ranks of Space :1889.
Posted by rhingley at 11:44 AM No comments: