Long before Tom Lehrer was introducing children to Silent “E” on the Electric Company, my generation was introduced to the not so silent “E” on Dr. Who. I remember rushing home after I completed my newspaper delivery in Spryfield to follow the adventures of the first two Doctors.

Hopefully the latest adventure would include an encounter those truly nasty metal clad beasts who would expound loudly upon the three “Es”.

Recently while reading the HOTT Yahoo Group Digest I came across an interesting posting that suggested that Irregular Miniatures produced in 1/300th scale an Attack Robot (NSF7) that would be perfect to fill the ecological niche occupied by the Daleks. 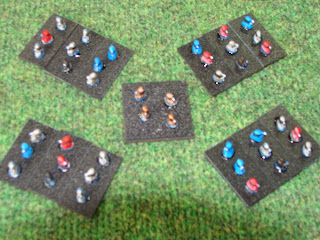 I ordered 20 sets, enough for 40 figures. Irregular Miniatures now accepts Paypal and the figures were in my mailbox at the end of the following week. My plan was to base them for Future Wars Commander. Forty figures would be enough to provide a command stand of four figures and 12 combat stands each with three figures. I decided that I would base them on an AFV/GEV stand, instead of an infantry stand.

I had been thinking of basing them, four or five figures to a stand as infantry, but I changed my mind and figured they are extremely dangerous, but small tankettes. The latest versions of Dr. Who even have them with hover and flying abilities. This is very real improvement from the days when they couldn’t even mount or descend stairs. 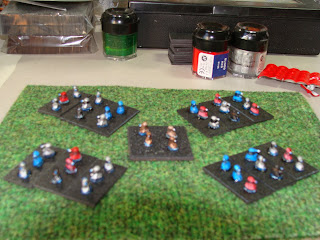 Photo 2: Side view
I used a Gale Force 9 base for the Command Stand, while the combat groups are mounted on 40mmx 30mm bases purchased from Robert Knestrick. He advertises his wares on EBay under the name of missiletoe. The bases are a laminated black plastic with heavy magnetic bottom. I decided to leave them untextured and unpainted, to give them a sterile asphalt look. I can always spruce them up later if need be.
Posted by rhingley at 6:15 PM No comments:

I started to play modern micro armour late in the 1970s using the WRG Armour and Infantry rules 1950-1975, and later the revised 1950-1985 rules set. In spite of the size of my micro armour collection I neglected to build up the air wing. This changed earlier this year, when I noticed an ad offering a large collection of modern micro-armour for sale in the Ottawa Miniature Gamers Yahoo Group. I did not need the ground forces and the gentleman was willing to part with his Soviet Air Power. 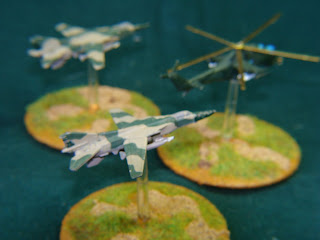 I obtained four MI-24 Hind A, one MI-24 Hind D and two MiG 27 Frogger ground attack aircraft. The one problem was that the helicopters were missing the rotors. GHQ was very helpful in providing replacement parts and I received the brass etched rotors in just 10 days, along with a full colour catalogue and a time limited coupon for my next order. 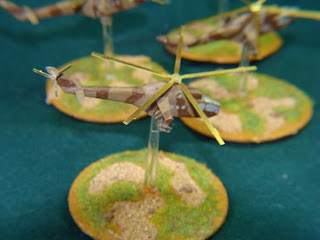 Photo 2: four MI-24 Hind A
I drilled holes into the bodies of all the airframes in order to use some Games Workshop clear flying bases to hold the aircraft in the air. As usual the base terrain was be built up using Liquitex Natural Sand, and then will be painted with DeSerres Raw Sienna (Series 1 No 185) and flocked using Citadel Sand and Scorched Grass.
Posted by rhingley at 1:02 PM No comments: