With this post I decided to showcase three homemade pieces of terrain. I was digging through my boxes of wargame supplies and felt that these should see the light of day.

1) Skull Mountain: This is intended to represent a possible stronghold. The piece was built up around a Grendel (or even older Fantasy Forge/Grenadier piece) resin cast cave entrance. Grendel is now part of Scotia Grendel Productions (/www.scotiagrendel.com/Products/) but I was unable to locate the piece on their website. They do offer a product that is similar in design, the Ram Skull Gate (ID 10014).  The resin piece is 6.0 cm in width, 3.0 cm in depth and 7.0 cm in height. The actual entrance measures 2.5 cm x 3.5 cm x 4.0 cm. 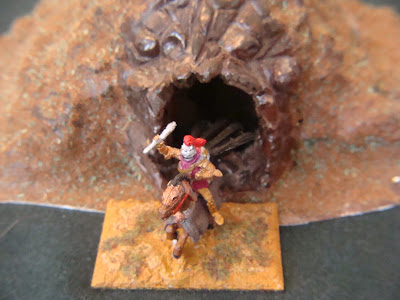 Hero? Exit the Batcave. Figure 25mm for scale.
The entrance was attached to a artist board base roughly 20cm x 16cm in area. The hill was then built up using Styrofoam, covered with a thin layer of plaster, painted and flocked. 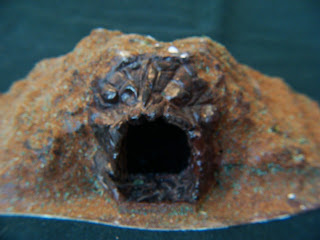 Darkness falls adding a more sinister apperance
2) Trench:  This trench was my first attempt to create a 3D below ground tabletop piece for Warhammer 40K. I took a rectangular piece of styrofoam and roughly cut it in two. I then attached the two piece to an artist board base (38cm x17cm) separated by 2.5cm.  Another two layers of styrofoam were added to build up the trench sides which were then coated with plaster. 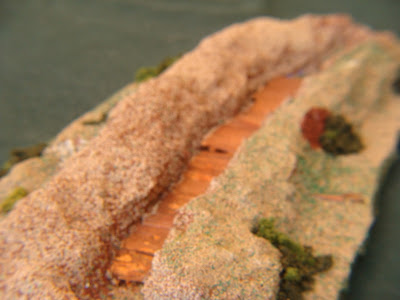 Trench with Duck Boards
The top of the piece was flocked with a brown sand to give the impression of turned over or dug dirt. The lower half flocked with green for grass. A balsa wood duck board was placed in the bottom of the trench.The balsa was scored with a pencil to create planks and the "planks" were glued to two long runners. 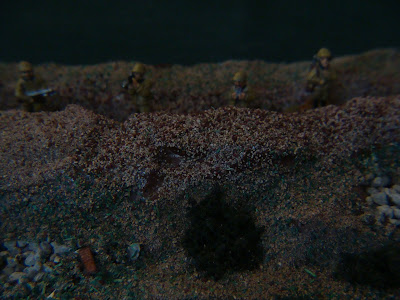 Stand To just before dawn. Platoon 20 Modern Soviets for scale.
The total piece has an overall height of about 3.5 cm, with the trench having a depth of 2.5 cm. As you can see from the photographs, we have a very basic design. Overall I don't think the trench has enough depth, nor is it quite wide enough. As you can see from the photo even, these Platoon 20 modern Soviets are too exposed along the firing line.

3) Roman Palisade: My goal was to create an impressive table edge terrain feature.Once again I used an artist board base that was 50 cm long and roughly 13.5 cm wide. Again, a  rectangular piece of styrofoam, cover in this case with paper towel soaked in plaster create the illusion of a low rise. 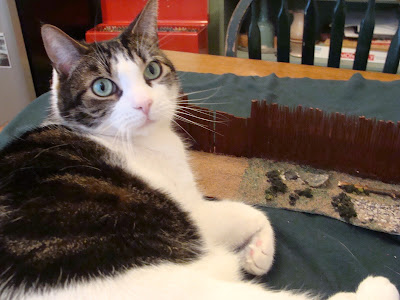 Palisade with Bean for scale (or Jack Bean in Gulliver's Travels)
The palisade itself was produced from standard wooden kitchen skewers. I cut the skewers in half using a pair of pliers. Thus only every second post is a sharpen stake, while the remainders are flat top.  Each half of the fort is about 20 cm long. The skewer halves were then glued to balsa cross beams. 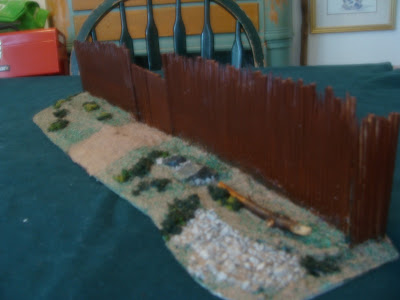 Unobstructed View (Front and Side)
A walkway was created from a double layer of balsa wood. The bottom layer was needed for support, and the top layer was scored with a pencil to have a "plank" effect. The walkway was glued to the top of the upper crossbeams and supported by dowel that was cut ti size. The gate was also made from balsa. 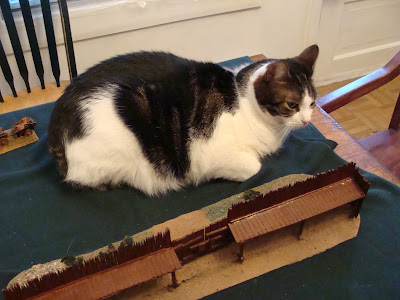 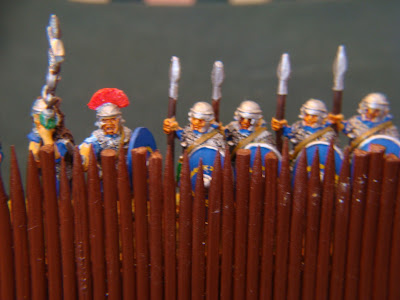 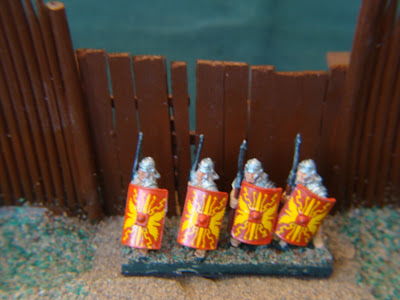 Legionniare detachment goes outside the wire on foot patrol. 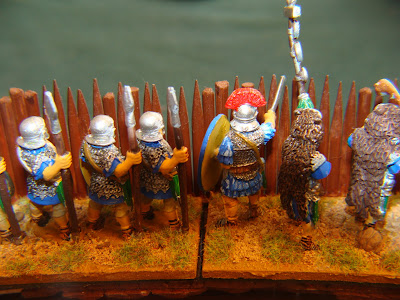 Walls manned: Inside View
Posted by rhingley at 8:46 AM 1 comment:

Email ThisBlogThis!Share to TwitterShare to FacebookShare to Pinterest
Labels: Terrain

At this point I would like to register a special thank you to Connie, one of the owners of Old Glory Miniatures in the US and to John Olsen of  Black Tree Design in Texas.

In June I wrote to Customer Support at Old Glory. In my email I stated that I had won a pack of  what I thought was WBS-48 Cavalry Pistols and Hats. I was basing my identification of the product on their web site catalogue. A number of figures had sockets, but were missing their right hand, and their pistol. I was looking for replacement parts.

I was mistaken in my identification. I sent a scan of the figures and the staff was able to correctly id as being PIM 1 Poncho in . Connie then sent me a set of hands with weapons for the set. No Charge. Kudos to the owners and staff of Old Glory Miniatures. 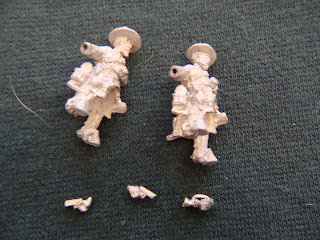 Sample PIM 1 Poncho in Mexico Showing socket and hand/weapons
Reading my Blog you may think that I have a fairly good opinion of Black Tree Designs. I have read on other blogs and in some gaming forums that some people find their service to be hap-hazard. I have to admit that there have been cases were I have waited months for figures to ship, and I have mentioned this in Captain's Blog. But the miniatures have always arrived, and John Olsen has always responded to any queries that I have made.

Recently I was sizing up my Romans and realized that I was short artillery crews. I had six Ral Partha Scorpions (Bolt Throwers) that had no crews. I wrote to John at BTD and asked it it was possible to purchase crew figures without the equipment. His reply was, " No problem'. He had to check with the production line to see when the crew figures could be cast and he expected the price to be about $1.50 a figure. I ordered six sets of two man bolt thrower crew figures. 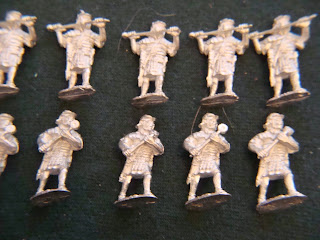 BTD Roman Artillery Crews (Cleaned and Trimmed)
A couple of weeks later I received an invoice on Nov 30th. A week later the figures arrived straight from the factory in the UK. That was incredibly fast postal service from the United Kingdom. Kudos to John Olsen for facilitating the order and making this project possible.
Posted by rhingley at 12:22 AM No comments:

Orcs of the White Hand

Since reading the Lord of the Rings in high school I have been tempted to build an Army of Darkness, that would do the Dark Lord proud. My first attempt was with Minifig half-orcs, Ral Partha orcs, Heritage Warg Riders, and etc, etc, etc. I sold this army in 1984 to help pay for my education costs. At the time it was the thing to do, and I know that this army continues to have a place of honour in it's new home. In recent years I have been inspired by the original LOTR (Lord of the Rings) line of figures produced by Harlequin Miniature (now known as Black Tree Design) and the great line of figures produced under license by Games Workshop based upon the movie trilogy.

I have a secret confession. I have slowly been massing the Forces of Darkness and Monday they shall be unleashed!! Ha, Ha, Ha......Actually, that is a bit of an exaggeration. Monday, I will be meeting with some fellow gamers to play War of the Ring by Fantasy Flight games. 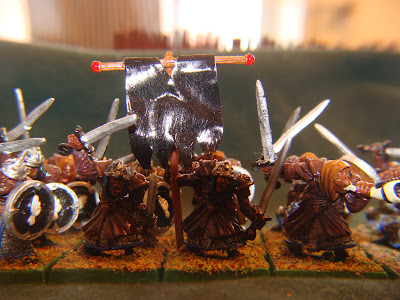 I have painted a 21 figure unit of Orcs of the White Hand. The figures were by Harlequin Miniatures and were very clean and very easy to work with. This unit was put together by winning a command pack and I think at least three packages of Orcs on eBay. The command pack contained the flag-bearer, a musican (with the horn) and a commander, who has a sword in each hand. The flag was made from some foil from a wine bottle. I have to paint the design on it. As you can see from the photos even the regular troops have a variety of poses and show good animation. 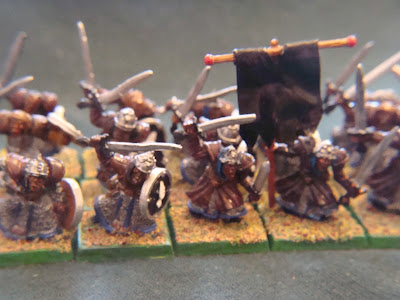 Black Tree Design continued to carry these figures as part of their fantasy line of figures until very recently. They were no longer referred to by LOTR trade name.Unfortunately the line has been discontinued but figures will continue to appear on eBay for years to come. I have to admit that I prefer the look of the Harlequin/BTD orc figures to those of  Peter Jackson's vision. It would be my sole complaint regarding his world view of the JRR Tolkien epic as I have purchased the GameWorshop's Balrog, Fellowship, Cave Troll and Warg Riders. In my opinion these miniatures are far superior to any other line that has been manufactured to date.
Posted by rhingley at 12:17 AM 1 comment: