Work in Progress, or another use for a Cribbage Board

A tin that has made it to the top of the pile, is a unit of Hungarian Light Calvary that I consider a great eBay purchase. It consisted of 10 Elements mounted on Litko Magnetic Bases. The horses were already painted. About half became loose during their travels but no harm was done. The horsemen were already primed.


Today I hot-glued the riders to the heads of nails. Instead of digging out a piece of styrofloam I grabbed a cribbage board off my bookcase. It served the purpose. Comme on dit en français: «Regarde». 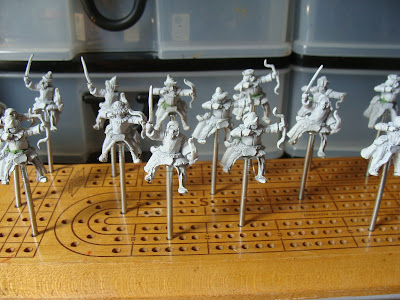 Posted by rhingley at 3:06 PM No comments:

My collection of World War II Soviet skirmish figures continues to grow. This time I am experimenting with the Army Painter system. The figures were primed and then sprayed with Leather Brown. When I have finished painting the details I plan to wash half the figures with Minwax Wood Stain (English Oak)  and the other half with Liquitex Transparent Burnt Umber. I washed my 15mn Hussite Army by the 2nd method and I like the effect. 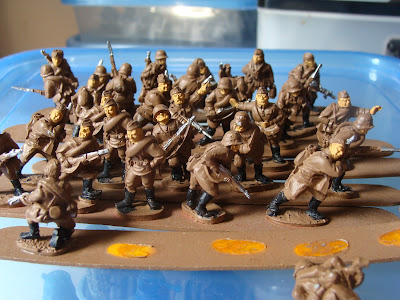 These figures are a mix of West Wind and Black Tree.
Posted by rhingley at 2:35 PM No comments:

The genesis of this army was the purchase of a box of assorted 15mm Dark Age miniatures at Cangames 2011 in Ottawa. Included were three packages of Hussite War Wagons by Thistle and Rose. According to the Miniatures Page (Updated June 20, 2003) the company was no longer in production. Each pack contained two WWgs , each of a different design with 4 draft horses and 4 oxen. There were no crew members.
Later that year I was fortunate enough to win three separate auctions on eBay that provided the crew of the wagons and the figures to fill up the ranks. These were packages of older 15mm Minifies. There was one command package (10 figures), one package of shooters (12 hand gunners and 12 bowmen) and a package of infantry (12 Military Flail men and 12 Halberdiers).

These are a couple of shots of the figures as they were being worked on. 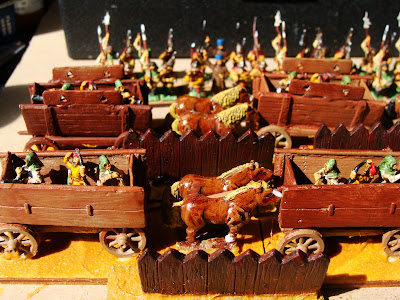 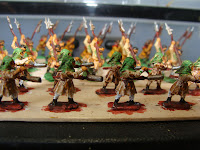 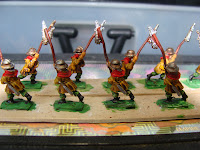 I was able to place 3 shooters into each wagon, two hand gunners, but only one bowman. It should be a crossbowmen, but I'll take what I can get. The remaining archers formed two elements of 4Bow, not exactly on the list but who cares.

Posted by rhingley at 2:05 PM No comments: