I went all out last week to finish painting the Black Raven Undead miniatures that I received as a gift at Christmas 2009. Since I already have a fully equipped 15mm HOTT (Hordes of the Things) Undead army my plan was to base these troops on the 25mm element base size in order to achieve a grand view of Undead Hordes. 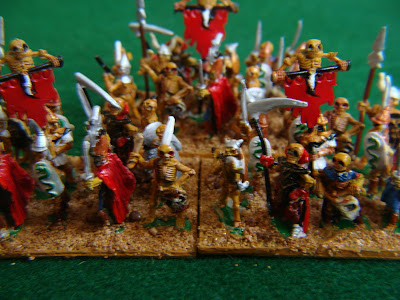 3 Elements of Undead Hordes
I also wanted to extend  the type of units available to my Undead Army. Optional troops that are not part of the offical Army Lists. Units of Shooters and Warbands which I would use as needed. 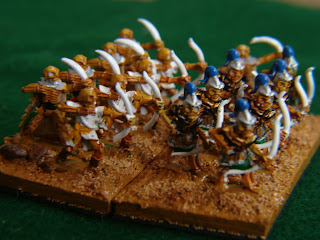 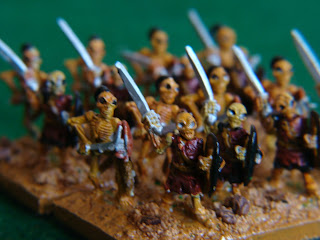 2 Elements of Undead Warbands
My plan was then to start painting the 5 packages of Black Raven Figures I purchased on Ebay last year. Unfortunately, before I could start I discovered another 6 sticks of figures belonging to this first group of miniatures. I have to finish painting them before I even think of the other figures. I don't think they'll be ready for my Halifax trip.
Posted by rhingley at 1:44 PM No comments:

This was another unfinished project sittimg in a drawer for at least a decade and a half. The unit consisted of 6 camel riders. The camels were easy to paint but the riders themselves were not at all inspiring. They were really old Heritage castings and made me think of lumps of lead. Finally one evening last week in the sweltering Montreal heat, I put brush to lead and in short order the project was completed. 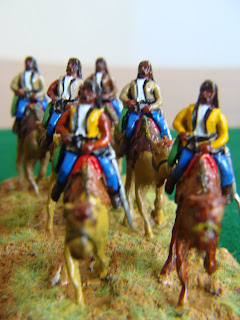 25mm Heritage Camel Riders Cross the Wastelands
The unit can be used across the ages by any number of armies but I decided to include it as part of my Saracen DBA/HOTT Arabian Mythos army.
Posted by rhingley at 1:23 PM No comments:

This week I had a very light class load. Tuesday was the final day of the current session and the summer session does not commence until tomorrow.  I  decided to complete some more units for my 28mm Saracen DBA/HOTT's army. It took the better part of three days to complete the work but I finished 3 elements of Warbands (two of 4 figures and one of 5 figures) and two elements of 4 man spear. 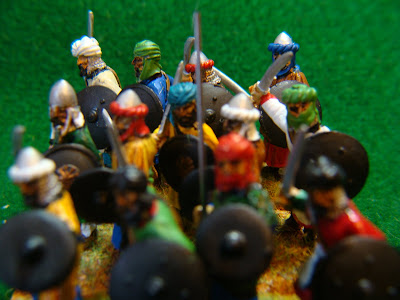 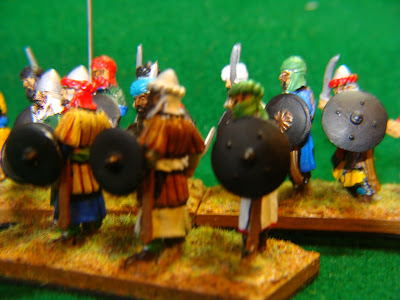 The figures are by Black Tree Designs and the spears are by Foundry. These figures were last seen prepped with a base coat added in Saracen DBA/HOTT Part VI sometime last October. I finally painted them. The bases are by Litko Game Accessories and the ground was built up using Golden Artist Colors Coarse Pumice Gel. The bases were then painted with DeSerres Raw Sienna (Series 1 No 185) and flocked using Citadel Scorched Grass. 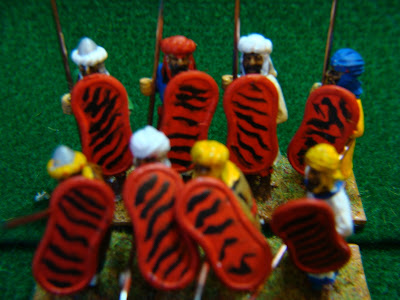 The Red Zebra Spearmen
In the wings I still have another 40 BTD figures for this project. Twenty figures are with bow and twenty are with crossbow. They have been prepped and basecoated. They await the touch of their master's brush. They will form elements of 3/4 Bow as well as a couple of Psiloi elements.
Posted by rhingley at 9:41 PM No comments: