A Touch of Whimsy: Kinder Surprise

Last week when I was in the check out line at my local grocery store the total had rang up to $49.94. I was 6 cents short of free delivery. Otherwise I'd have to pay a $3 fee. There in front of me, laid a solution. I grabbed a Kinder Surprise Egg for my room mate.

One morning last week she broke it open. It contained a toy boat. When she brought the boat in to me and said I could have it, I immediately thought I have an army that can go with this.

Last Victoria Day weekend at the Cangames Marketplace, I purchased a 6mm Baccus Punic War Army. I intend to paint and mount the army for Warmaster Ancient ruleset. So far I have mounted the three elephants that came with it.

I glued the boat to a GF9 40mm square Magnetic base and the sea was built up using Liquitex Natural Sand Texture Gel. Once the base was painted blue and whitecaps added I really felt that it looked like a fun piece to go with the army. 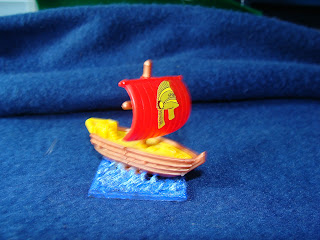 Above: Jason and the Argonaults are about to be rolled over by a rogue wave. (Just ignore the SPQR on the sail)
Posted by rhingley at 11:02 PM 1 comment:

In an August posting I wrote that I made an impulse Buy-It-Now bid on a Soviet 57mm AT-Gun by Black Tree Design at 28mm Scale. The item arrived last week and since it was a stand alone piece I went to work on it right away. 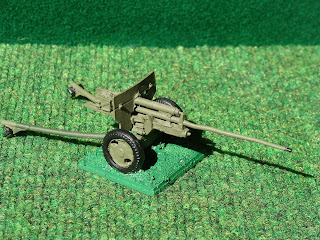 The gun arrived in nine pieces that needed to be put together. I used Games Workshop Superglue, which I personally think, is their one product that provides the most bang for the buck to put the piece together. The parts that needed to be assembled were an axcle body, two wheels, a gun mantle, the AT gun, two limbers and two tiny screw wheels for sight adjustments.

In addition three crew members were included. One of the figures is equiped with a generic type shell. It is obvious that it is a) too big for the bore of the gun and b) is clearly not an AT round. 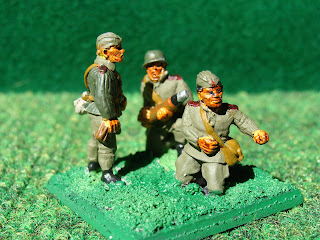 Gunners and the gun were mounted on seperate GF9 40mm square magnetic bases.

I received in the mail today the Warriors of Islam from Black Tree Designs that I ordered at the end of August. It was a unit builder pack, which consists of a mix of 20 figures in various poses. The package I received had 22 figures (13 sword and 9 spear). My only complaint with the BTD figures is the type of spear that is provided.  It consists of a thin length wire that needs to be cut. For the last batch of spear men I processed I used left over spears from other projects.

This photo is the figures after cleaning off excess flash and laying them out to dry after their bath: 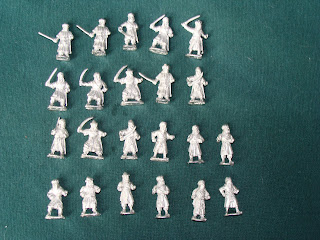 I finally remembered to take a clear picture of the Flying Carpet for the HOTT rules: 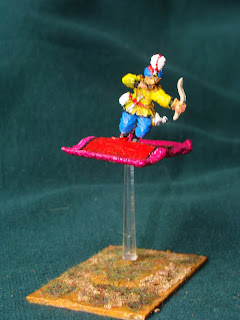 Posted by rhingley at 4:17 PM No comments:

I was hoping to make postings at least once a week but that plan seems to have fallen through. I think I'm averaging a posting every 10 days.  I have finished painting the Black Tree Design Warriors of Islam. I originally purchased two packs of 20 figures. Each came with 10 swords men and 10 spear men. Thrown into the mix was an extra command figure. As noted before I only needed to finish painting the spearmen.
I have chosen to mount them into two elements of 4 Spearmen and four elements of 3 Auxilia (or Warband). I also had a Hero Element (using the Leader figure and a couple of cronies) that I had to mount and flock at the same time as the spearmen.

Picture One: Two Elements of 4 man Spear and one Hero Element: 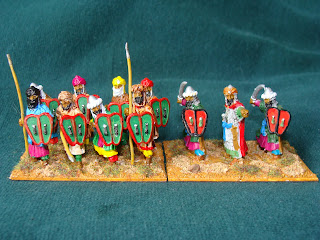 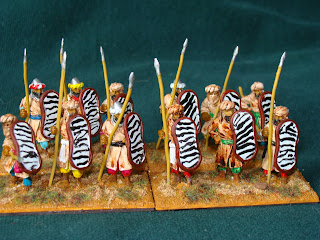 I still have a couple of remaining figures to paint. The planned elements include the Vizier and Bodyguard (Magician General Element) or the Caliph with his giant Negro Bodyguards (Blade General Element) and an Iman as a Cleric Element all for use with HOTT rules.
I am still waiting for the arrival of the backordered Bowmen to complete the needed shooter Elements for this army.
Posted by rhingley at 2:32 PM No comments: