Spartacus: A Game of Blood and Treachery

Spartacus: A Game of Blood and Treachery is a fast paced board game set in Ancient Rome. The game includes backstabbing schemes, fierce bidding and bloody gladiatorial combat. It is designed for 3-4 players. 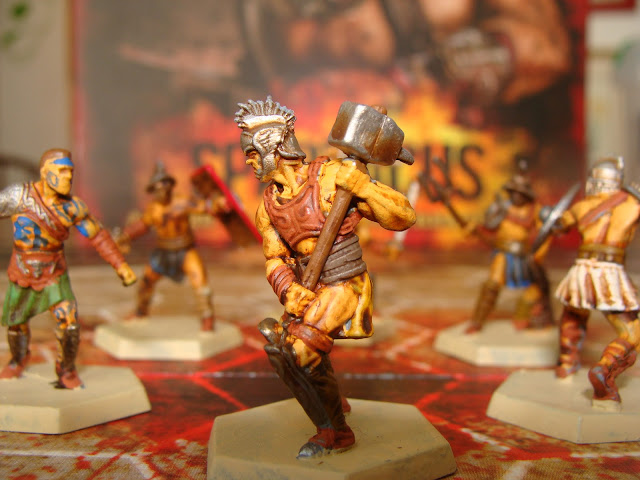 I was introduced to the game at Stack Académie III, a local weekend long board gaming event held last May. I thoroughly enjoyed playing the game and picked up both it and the expansion for my bi-weekly Friday night gaming group. We were going to play it last month but ended up with 5 players.  I had just ordered the expansion, so we played Eclipse instead. 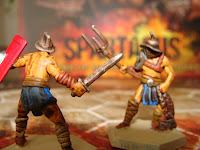 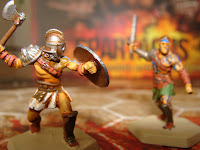 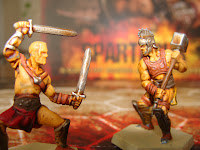 So if all goes according to plan tonight is the night and the figures are painted.

I also had a wicked idea and present Spartacus: The Bad Wolf Clan for the games….

Posted by rhingley at 9:29 AM No comments:

Another quick post. I recently finished painting a group of 12 Norman Knights. This is about 1/3 of the figures I need for a DBA army. I have blogged before about the infantry that I painted. 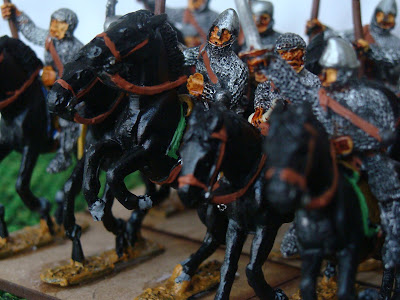 These figures are by Black Tree Design. I found them to be a very clean and easy to work with. I like the fact that the spears are incorporated into the figure. Shields need to be attached. I still haven't decided what to do about the shields. Do I paint them myself or do I order a sheet of decals? For this reason they are not attached. 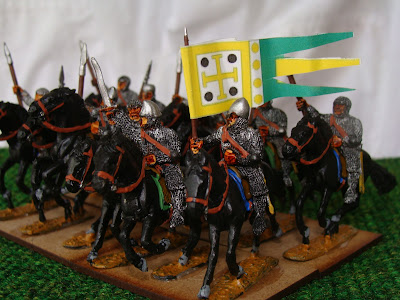 The standard bearer had the top half of the pole broken off. I removed the bottom half, drilled a hole through the figure's hand and added a replacement. The banner itself was downloaded from another gaming blog about 18 months ago. I cannot find the reference. Please let me know if it is your design and I will link to it.

I found the horses to be bigger than expected. I had to cut down the bases of two of them to fit on a 40mm deep DBA element. They still had to mounted at angles to insure a proper fit. It also took some trial and error to make  sure that the elements could line up together as the heads and tails of the horses extend quite a bit beyond the front and rear base edges.

Regardless, I think these is a nice looking unit.
Posted by rhingley at 8:49 AM No comments:

Reaper Madness II: There be Dragons

A quick post to show off the Reaper Dragons that I obtained for use with HOTT. Both are shown with a 25mm Gripping Beast Roman Centurion for scale. 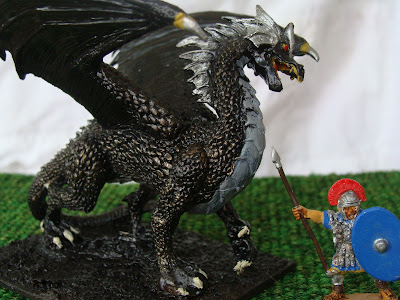 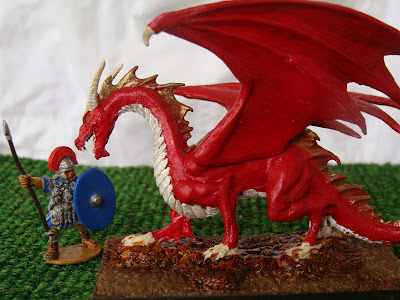 Posted by rhingley at 2:39 PM No comments:

Heroes of the Soviet Union Part 1

I present my latest platoon of Soviet Infantry based for the WRG War Games Rules Armour & Infantry 1925-1950 © 1973.  I already have 3 Soviet platoons (28mm figures) mounted on individual stands and felt like doing something retro with this group of figures. It consists of


This rule set has always been a favorite of mine. I've been playing with them practically since they were first published. Over the decades I have played  with many other WW2 rule sets, and I even own a number of them. I keep coming back to this set for a quick and simple game.

As they are based, I’d have no problem using these figures for Blitzkrieg Commander, the most recent ruleset I've purchased for this scale of game.

In my opinion the front line soldiers of the Red Army deserve the title “Heroes of the Soviet Union”. Regardless, if they were conscripted or volunteered:  they overcame frightful losses, often due to the incompetent leadership during the early war period, and later war attitudes  which allowed Soviet generals to squander thousands of lives knowing  they had the manpower and a belief at the top, that the ends justified the means.

Without a doubt to paraphrase the Right Honourable Winston Churchill, “the Russian Armies tore the guts out of the German Army.”

His words may be read here, in their entirety, in his report on the War Situation given to the House on August 2nd 1944.

Martyrs of the Seawolves

My planned posting on “Martyrs of the Seawolves” was beaten as a headliner today by the author of The Land of Lead.  On that blog there is fantastic description of a small “Viking Raid on a Monastery”, well-illustrated with photographs.

The Viking Age is considered to commence with the raid against the monastery of Lindisfarne on England's east coast in the year 793 AD and is documented in the Anglo-Saxon Chronicles.

“In this year fierce, foreboding omens came over the land of the Northumbrians, and the wretched people shook; there were excessive whirlwinds, lightning, and fiery dragons were seen flying in the sky. These signs were followed by great famine, and a little after those, that same year on 6th ides of January, the ravaging of wretched heathen people destroyed God's church at Lindisfarne.”

A slightly more detailed description is recorded in “History of the Church of Durham” by the monk Simeon:

On the seventh of the ides of June, they reached the church of Lindisfarne, and there they miserably ravaged and pillaged everything; they trod the holy things under their polluted feet, they dug down the altars, and plundered all the treasures of the church. Some of the brethren they slew, some they carried off with them in chains, the greater number they stripped naked, insulted, and cast out of doors, and some they drowned in the sea.
Posted by rhingley at 7:32 PM 7 comments:

I spent my evenings this week completing the unit of 20 Old Glory Light Cavalry miniatures that were taking up residence on my cribbage board. It was not a hardship since I owe three, and the board will now be occupied by two dozen colonial lancers that I want to work on. The flocking was completed early this morning. 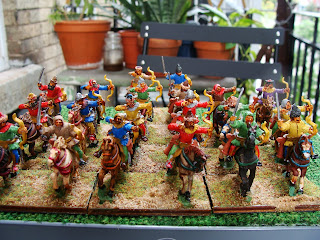 The Hungarians were an impulse buy on eBay. They were inexpensive and the horses were already painted and mounted on appropriate (WRG/DBX) 60 x 40 mm magnetic bases. I did a wash on the horses and reattached a couple of them to their bases.

I’m not sure which army will use these troops but I imagine they will see action either for or against the Saracens at some point.
Posted by rhingley at 6:06 PM 4 comments:

Last month I moved my painting table to be located in front of my window. It is a great place to watch the birds in the tree and to take full advantage of the natural light, or not. Most of my painting is done at night or in the early morning hours. I will work on minis during the day, but only on weekends.

As you can see my desk is quite cluttered. After all a clean desk is a sign of a sick mind. This morning at 6:30 AM I added texture paint to the miniatures in the foreground.

Monday afternoon I arrived home late in the day and took off my backpack and noticed a whiff of smoke arising from my work table. It looked like it was enjoying a cigarette.

In this photo I recreated the situation to illustrate the danger. The magnifying glass was sitting on the desk. Due to the position of the lens and the sun angle, the sunlight converged as a focal point directly onto the tabletop. In the following photo the focal point is to the right of the green paint. The table began to smoke, and the heat raised a blister in the paint. I was lucky to have caught it when I did.

The lens is no longer on the table, nor is it in the path of any sunlight. I wrote this post to be a word of warning of possible dangers lurking on your own work desks.
Posted by rhingley at 7:32 PM 11 comments: