DBA: Knights of the Order of Saint John the Hospitaller 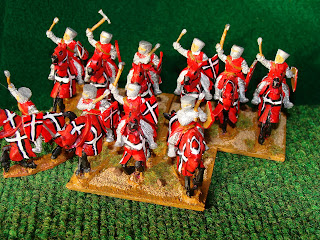 This unit of knights was advertised on Ebay OLD GLORY 25 MM MEDIEVAL FIGURES FIRST CRUSADES. However checking them out on the Old Glory Website they are very clearly Product ID: DAC-22 Knights-barded horses and mace from the Third Crusade- Richard the Lionhearted line. I needed some opposition to go against the Saraceens that I was working on earlier this year and choose to produce a unit of "Holy Orders". The design is basic, and would benefit from a steadier hand than mine, but I like the effect. The armour could easily be anywhere from 1250-1320 and could represent the order before it was exiled to Rhodes in 1309.

To back them up I have a solid unit of heavy foot. This unit was produced by 6 packs of Ral Partha Adventures bought on Ebay almost 7 years ago. They were painted up pretty much one weekend and decals on the shields are from the Warhammer Fantasy line. 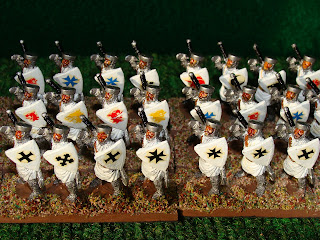 I also have a unit of Revenge Miniatures Norman Heavy Infantry (DA25) that I have started to work on.  They also have the benefits of being almost identical to the Heavy Frankish Infantry which saw action in the Holy Lands or they can be used in surpressing the Saxon serfs in Merrie Ode Englande in the days of Robin Hood. The pack came with 32 figures, two of them casualties (see front rank in photo below) and unattached kite shields (not shown). Posted by rhingley at 7:18 PM No comments:

As a child growing up watching the Richard Greene ITV series or enjoying the classic 1939 Errol Flynn film, Robin Hood has always been a favorite legend that excited my imagination. Three years ago I exchanged some emails with Joseph Lappin on the subject and purposed the following options for building a Robin Hood Hordes of the Things Army. in 25mm scale.

Example 1: Some Merry Men as Three Elements of Shooters 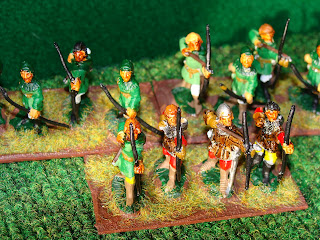 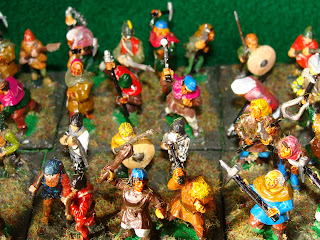