Last month I blogged about some of the ideas I had for a Norman (Robin Hood) HOTT Army and expressed the comment that I would have to pick up some additional troops. Ross Macfarlane, a long standing friend and fellow gamer made an offer I could not refuse. He had in his possession some old Ral Partha Norman and Crusader figures that he offered to send to me. They went a long way into filling my missing troop types. I decide I would keep the figures as painted, but I rebased them. Merci Ross!!!

BTW According to Ross the Knights and Crossbow men were painted by Peter Crane.

I now need to get some crossbowmen, mounted troops and a few individual figures. I think that the obvious characters that are needed for the Norman side include

Prince John, an obvious sneaker, who will steal your stronghold (throne) if you're not careful. I ordered a figure from Black Tree Miniatures that I think will serve as an excellent Prince John figure. It is a set of figure from their feudal line.  I also ordered a set of monks, which will provide a Frier Tuck figure. 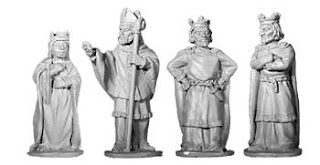 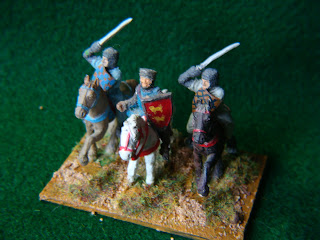 The Sheriff of Nottingham. The general in charge of the army.
I selected a figure with two lions on the shield. The High Sheriff of Nottinghamshire, Derbyshire and the Royal Forests existed between 1068 and 1449. In 1449 Nottingham appointed its own Sheriff. The position of Sheriff represnts Royal Authority in enforcing the law. 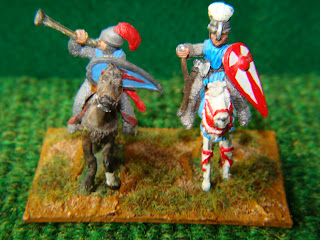 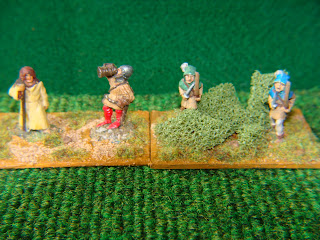 Dickon Malbete, a lurker.
In the movie "The Adventures of Robin Hood" Dickson is an assassin sent by Prince John to murder King Richard. In return he'd regain his lost rank.

The Lurker element on the left has Dickson enjoying a brew. perhaps in the presence of a disquised King Richard, while the element of Lurkers on the right, are two of the Merrie Men lying in wait in Sherwood Forest. 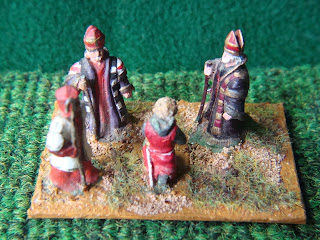 The Bishop of the Black Canons.
A cleric, not neccessarily a good one, but a cleric none the less. On this Clerical Element the Bishop is joined in blessing a memeber of his flock, or is he about to crown Prince John, King? 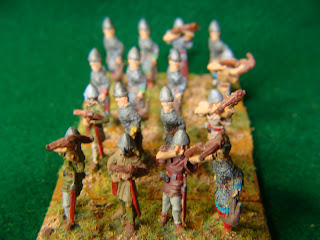 4 Elements of Crossbowmen/Shooters
Ross was kind enough to send a selection of mounted figures, some that represented the Norman invasion period and other figures that are more closely representative of the English Knights that were at the 2nd Crusade. I decided that with the selection provied that the Normans could field as part of the HOTT army two Elements of Knights or three Elements of Riders. The Sheriff of Nottingham Element could be either a Knight or Rider Element. 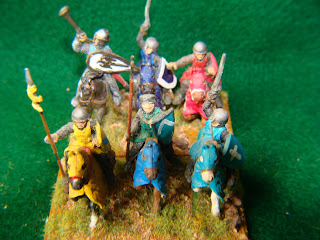 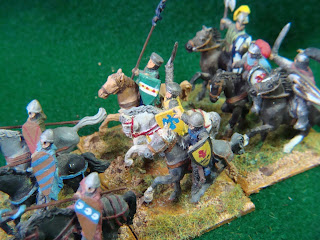 Three Elements of Riders.
Posted by rhingley at 9:19 PM 1 comment:

It has been a while since I have blogged. The summer has been good to me and I didn't do any work on my miniatures. I had the opportunity to play a massive HOTT (72 points per side) battle with Joseph when I was in Halifax.

Last year I mused about doing a 25/28mm Robin Hood (HOTT) Horde of The Things army. Ross commented with some ideas for the opposition and just before Christmas a pack of Revenge (Old Glory) Norman Heavy Infantry went up for auction on Ebay. 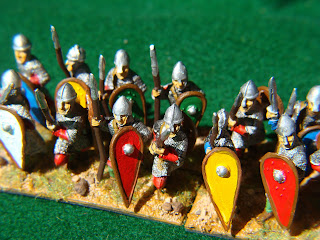 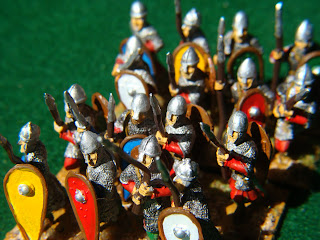 2nd View of Spear in column
The package contained 32 figures, most figures being spearmen, but it also included two casualties. These two figures were mounted on individual figures. The rest were divided into four elements of  4 Spear and 2 elements of 7 Hordes. I based this decision upon the actions and military effectiveness of the Norman troops as portrayed in various Robin Hood movies and TV shows.  I felt that two units of Hordes were not uncalled for and the DBM army lists for both the Western Norman lists and the Eastern Frankish lists in the DBM included (peasant) hordes. 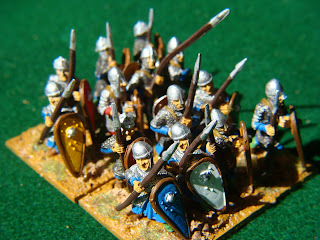 Two Elements of 7 Hordes
The figures already included their weapons in hand, but the kite shield had to be attached. The shields came in two main types. One style being long and narrow and the other being a bit shorter and wider. I now have to come up with a couple of banners for the two standard bearers. I haven't found anything on the web that I am happy with yet. I may decide to go with the plain Jerusalem cross. 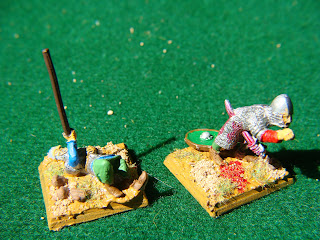 Casualties of War
Somes Ideas For a Norman (Robin Hood) HOTT Army
I now need to get some crossbowmen, mounted troops and a few individual figures. I think that the obvious characters that are needed for the Norman side include

Prince John, an obvious sneaker, who will steal your stronghold (throne) if you're not careful.

The Sheriff of Knottingham. The general in charge of the army.

Sir Guy of Gisbourne (and according to Wikipedia also spelled Gisburne, Gisborne, Gysborne, or Gisborn). The hero of the Normans.

Dickon Malbete, a lurker. In the movie "The Adventures of Robin Hood" Dickson is an assassin sent by Prince John to murder King Richard. In return he'll regain his lost rank.

The Bishop of the Black Canons. A cleric, not neccessarily a good one, but a cleric none the less.
Posted by rhingley at 7:30 PM 1 comment: