There is no doubt that the Elf Spearmen and Medieval Handgunners fit more into my War of the Roses collection of figures, than with the Robin Hood. Ross' remarkable Bag of Holding contained even more figures. I ended up with three Elements of Knights. When he and I were originally discussing my ideas for the Norman's for Robin Hood, Ross asked if I was intereted in Norman figures or later style Knights. My response was for Norman style figures.

However last August he appeared with 9 Knights. Six were mounted on bases and the rest were loose figures. I have to say the paint job was superior to what I could have done. Of the six knights mounted on elements, four were of name.

Now comes the danger from letting a Gift Bearing Greek into your home. The gifts sneak up upon you and you find yourself staring into a brand new period that you had no intention of gaming. In my case, it  appears that I am now destined to fight over the English-Scottish border during the 13th and 14th centuries. 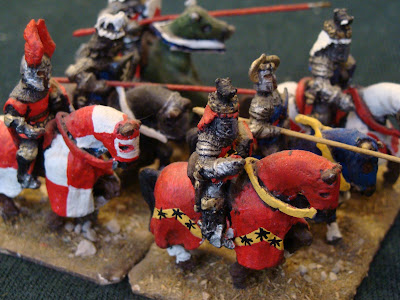 The Knights with Names were

The Earl of Carrick , not clearly seen here. Third figure rear rank.
The following two paragraphs are from Wikipedia


Donnchadh's granddaughter Marjorie (Marthoc, Martha, Margaret), who later held the title in her own right, married Robert de Brus, who later became Lord of Annandale. Their son, also named Robert and known as "Robert the Bruce", would later rule Scotland as King Robert I, causing the earldom to merge into the Crown. Robert was also created a baron in the Peerage of England by writ of summons in 1295 as Baron Bruce of Anandale; the title became abeyant with the death of his son David II in 1371. Thereafter, successive Kings of Scots re-created the Earldom several times, but made it non-heritable, specifying that the earldom would revert to the Crown upon the death of the holder. Thus several creations ended with a reversion to the crown or with the holder becoming King. 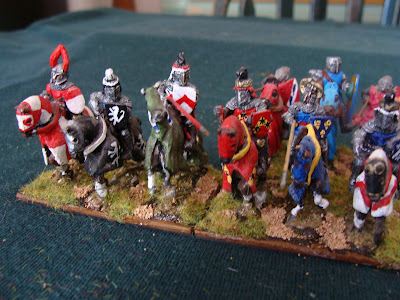 The Earl of Buchan, middle figure rear rank (First Photo).
The following paragrah is from wikipedia

The Mormaer or Earl of Buchan was originally the provincial ruler of the medieval province of Buchan. Buchan was the first Mormaerdom in the High Medieval Kingdom of the Scots to pass into the hands of a non-Scottish family in the male line. The earldom had three lines in its history, not counting passings from female heiresses to sons. Today it is held by the Erskine family as a peerage. The current holder is Malcolm Erskine, 17th Earl of Buchan (b. 1930).

Sir David Berkeley. I suspect that this is suppose to be the Sir David de Berkeley related to the Clan MacFarlane, who was killed at battle of Bannockburn on June 24, 1314.

Sir Robert Menzies :  As Normanisation progressed into Scotland under the descendants of Malcolm Canmore and Queen Margaret, a family apparently settled in Lothian and from there moved into the Highlands. The name occurs in charters of the 12th and 13th centuries and in 1 249 Sir Robert de Meyeris became Lord Chamberlain of Scotland to Alexander II. His son Alexander held Weem, Aberfeldy and Fortingall in Atholl. He supported Bruce at Bannockburn and was rewarded further territories, in Glendochart and Durisdeer in Nithsdale, thus by the King's death the Menzies possessions extended west from Aberfeldy almost as far as Loch Lomond.

Note: The above paragraph is taken from A Brief History of The Menzie Name by Ron Mennie.

BTW I am just guessing at the identities of those with names. All the following write-ups were lifted from the Web. I am not an expert on Scottish nobility so please help correct any errors I have made. 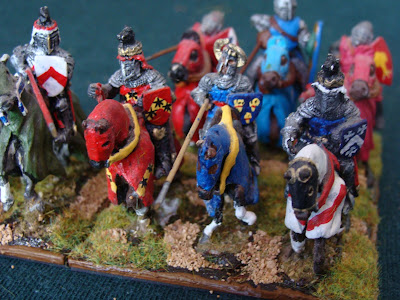