The Anatomy of a Small War Part 6 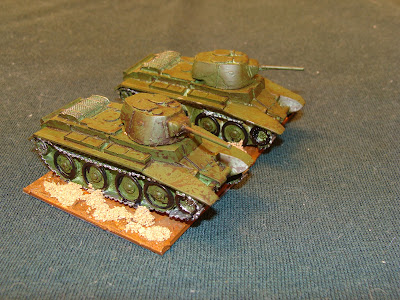 It has been a while since I've blogged about the clashes between the Soviet Union and the Japanese Empire in the late 1930s. At some point last year a number of 20mm  early war Soviet  tanks came up for auction on eBay. They were resin casts made by Frontline Wargaming. I purchased two  BT-7 Fast Tanks (RUS 10) and two variants of the T-26 Light Tank (RUS-5 Model S/1939 and RUS-11 Model "B"/1933). The main difference in appearance of these two vehicles is the turret.

The only complaint I have with these models, is the poor state that the tracks of three of them were in. The tracks were very brittle and had crumbled to dust in some places. One track was broken into 4 separate pieces. To be honest, and to err on the side of the manufacturer I cannot state if this was a fault of the product or the previous owner.  After all, they were sold AS IS, so buyer beware. I can state the models I received were in their original packages and  were wrapped in bubble wrap in when shipped to me in a solid cardboard box,  The box itself was not crushed or dented. 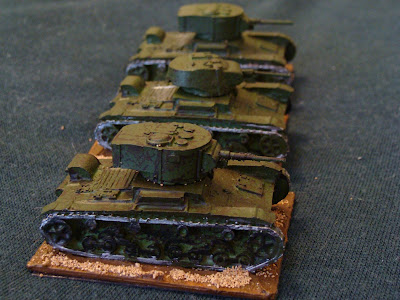 As you can see I was able to glue the tracks onto the tank chassis, while it is evident that sections of the tracks are missing. This because they appeared to have disintegrated into dust particles, while aging in their packages.

All in all, I was pleased with the models. I was looking for something quick and dirty (i.e. cheap) to field against my Imperial Japanese Army. To add to the anti-Japanese coalition, I also put together and painted two 1/76th scale Airfix Models Sherman tanks. I haven't built models in years and in spite of being all thumbs, I wish I had the patience then, that I have now.It would have been a fantastic help piecing models together. 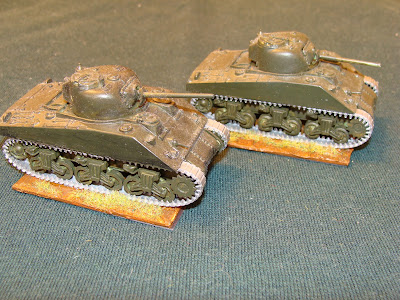