I painted a unit of 12 Norman Knights during the summer of 2013. The figures were by Black Tree Design, and I was happy with the results. However their shields were pretty drab and the bases had not received their full treatment. This fall I placed an order to Gripping Beast to purchase a pack of their Norman shields and to order some  Little Big Man Studios ' transfers. I think the results speak for themselves. Something now has to be done about William the Bastard's banner. 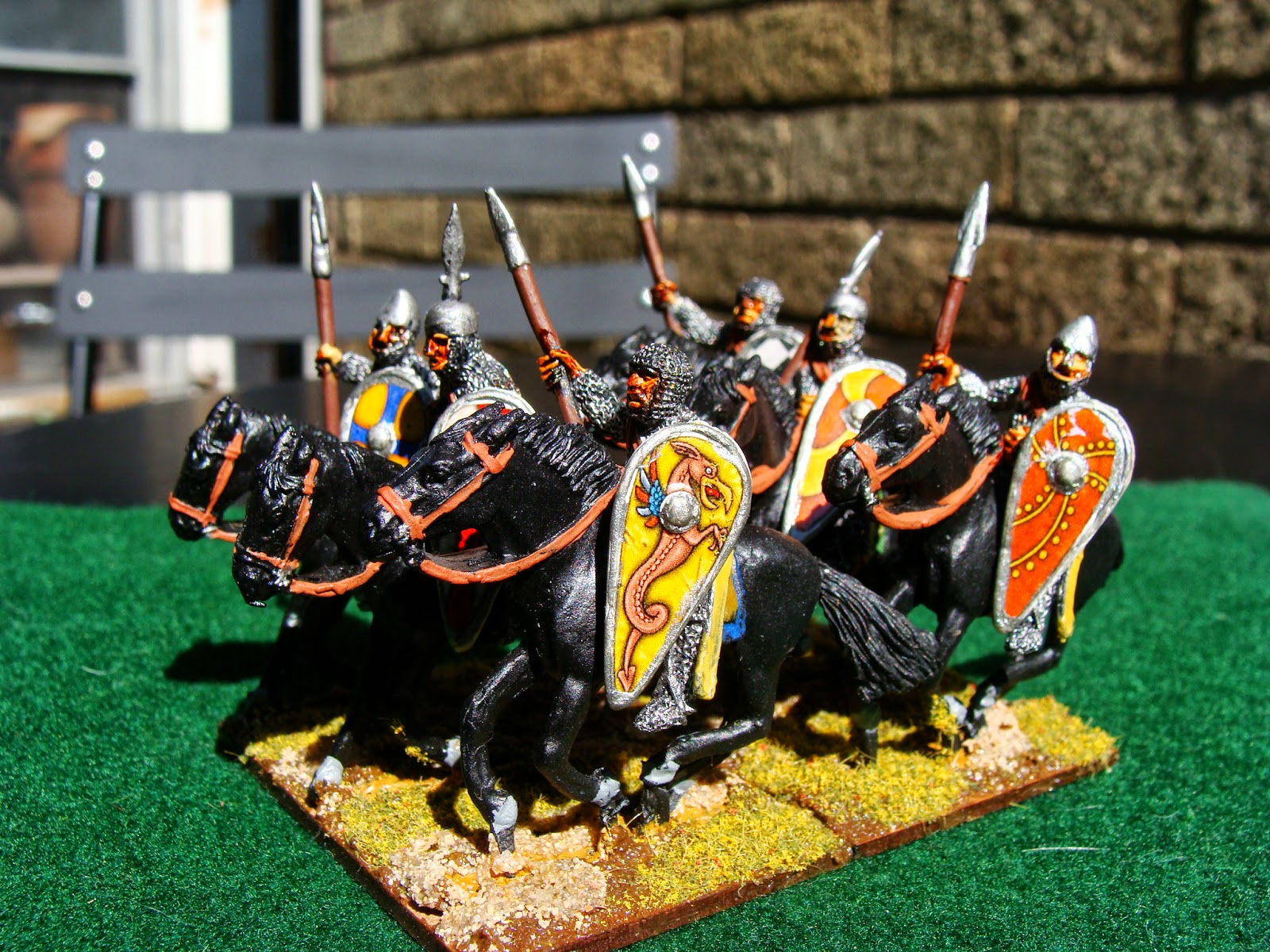 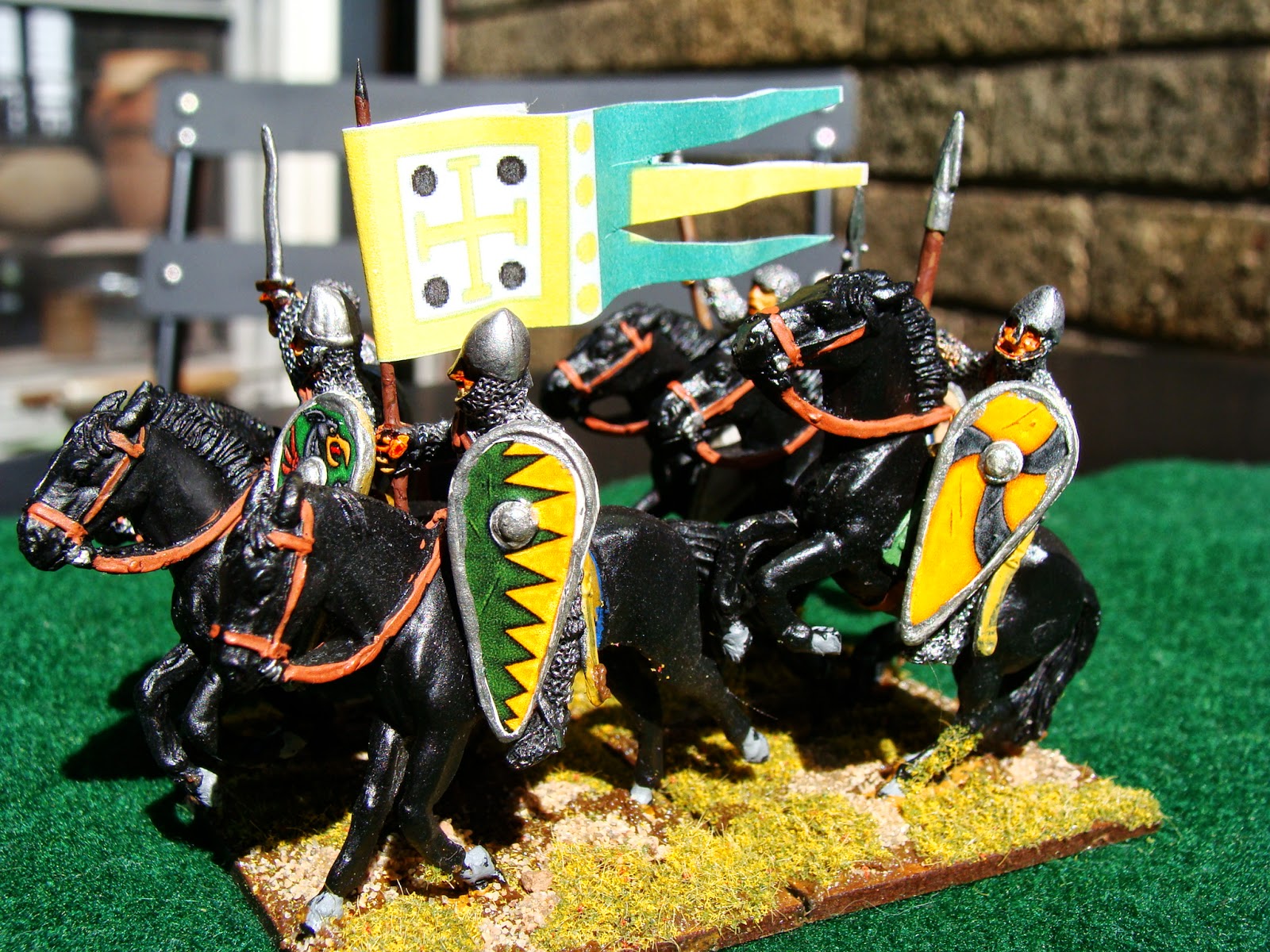 Posted by rhingley at 9:03 PM No comments:

This post is about a month overdue. I was the very fortunate winner of a giveaway by Monty Luhmann whose blog, Twin City Gamer is worth talking a look at. He does some fantastic work, and the photo of the Viking Warlord I received is a fine example. The stand is the start of a Saga warband. The rules arrived in the mail two weeks ago and I now have to paint the followers of this fine fellow. 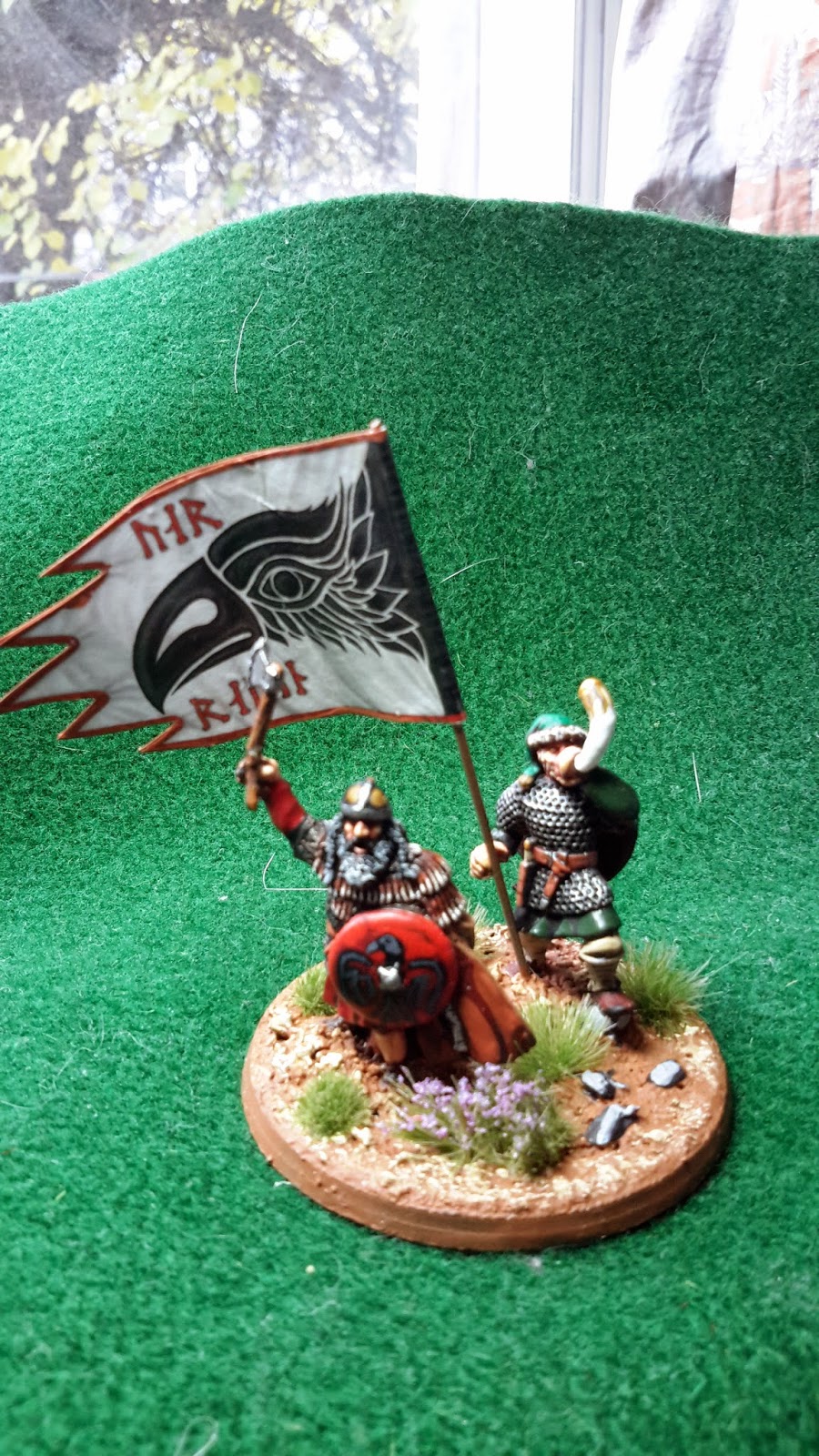 I had previously started to paint a 28mm DBA Viking army, but now I am torn. Do I finish the army, or do I rebase the figures for the warband? The following figures were on unflocked bases and the work on the elements was completed at the same time as the Norman Knights. 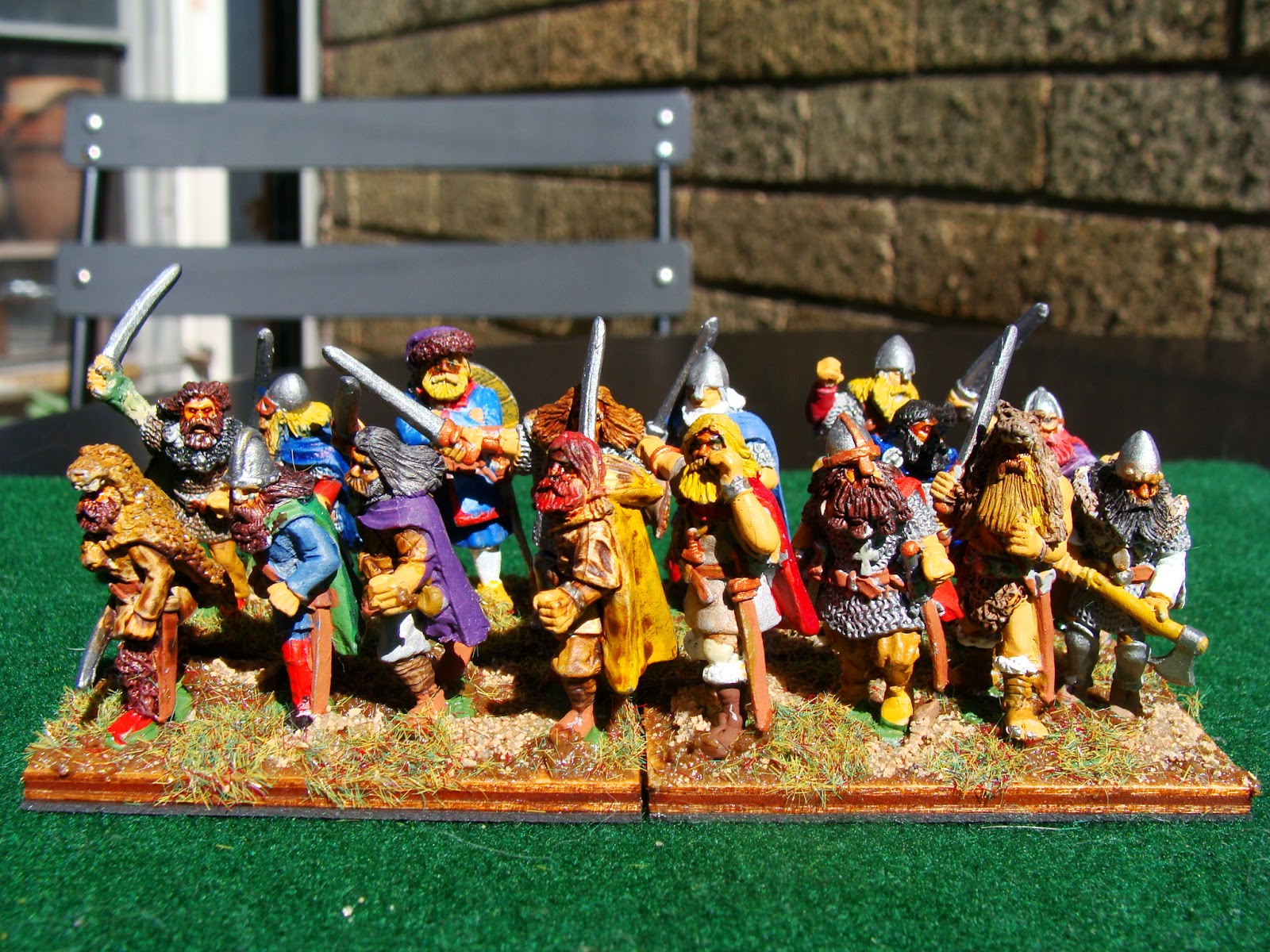 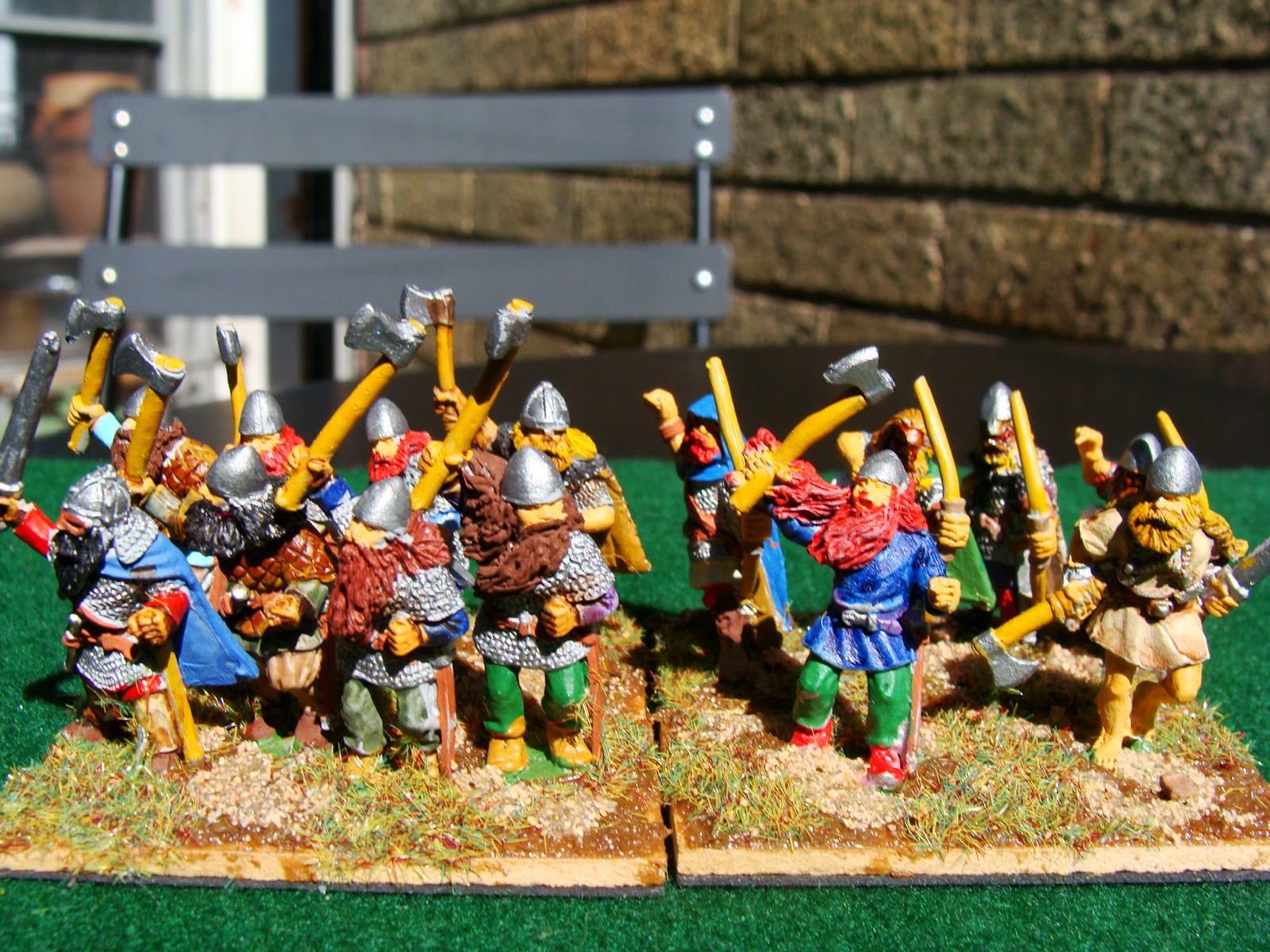 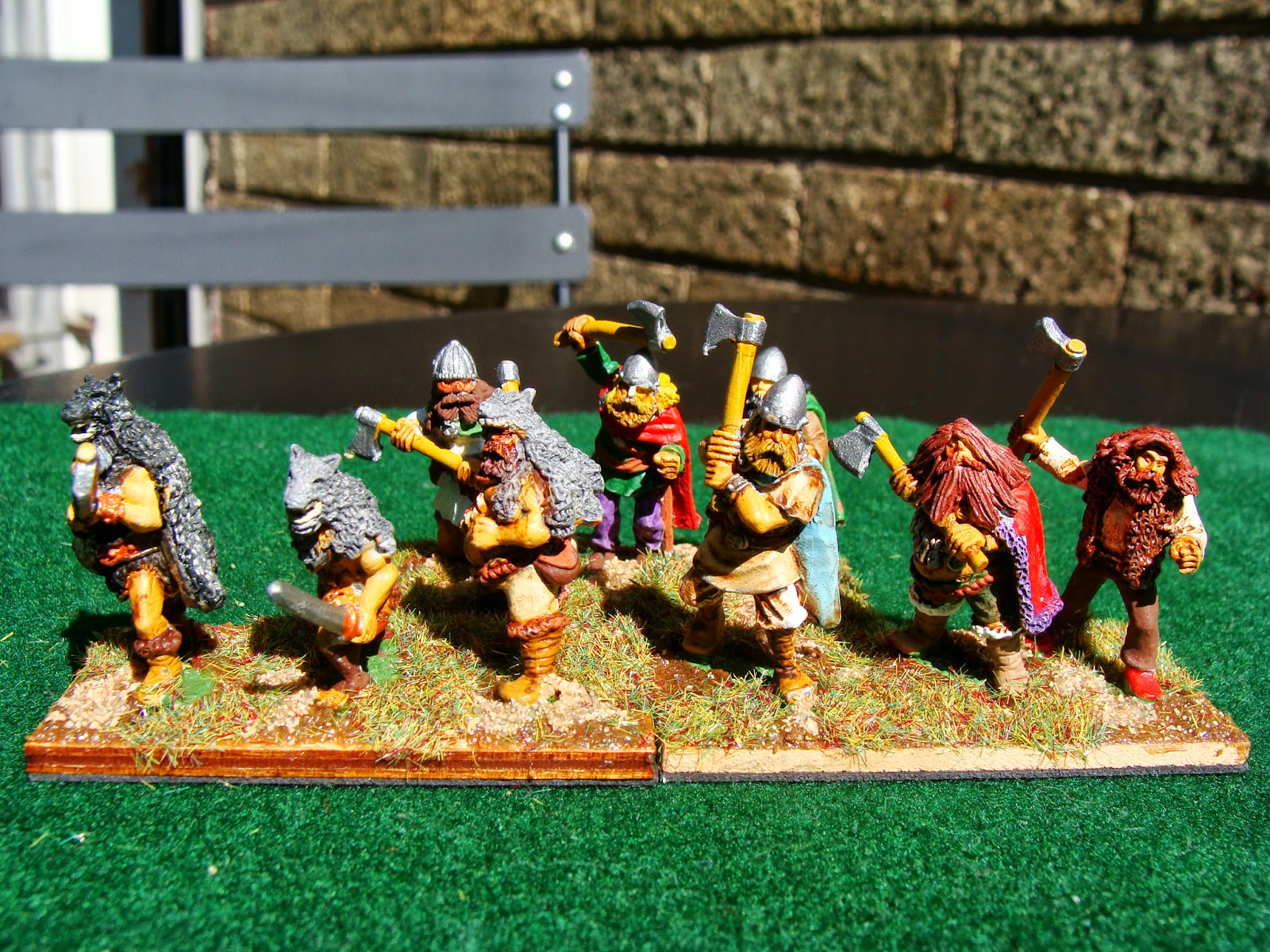 However this was before the idea of a Saga Warband was planted in my head. As well as having another 40-50 Wargames Foundry figures to paint, I also have a stack of RAFM Vikings in my mountain of unpainted lead.
Posted by rhingley at 8:44 PM No comments:

Earlier this past summer, Le Valet d'Coeur a local game store in Montreal had its annual garage sale. I took the opportunity to pick up two boxes of Oriental Blades by eM-4 Miniatures. 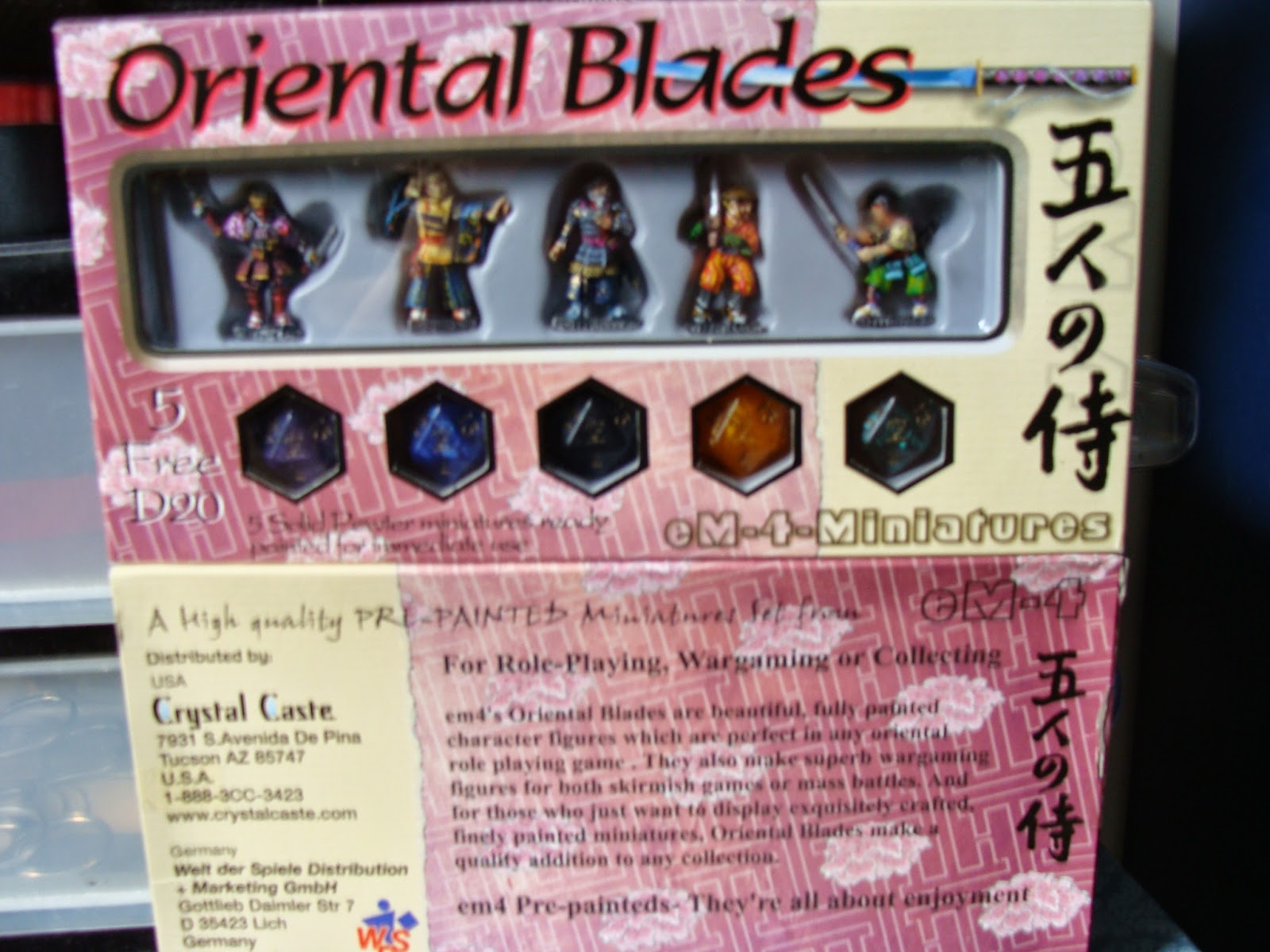 The figures come pre-painted and include a matching 20-sided die for mini. For five bucks, how could I go wrong. I figured I can always use the figures for Bushito by FGU or some other Japanese skirmish game. The only work I did was to do the bases of the figures. A relatively painless job. I added a metal washer to the bottom of each base for weight and to allow them to be stored on a magnetic sheet. 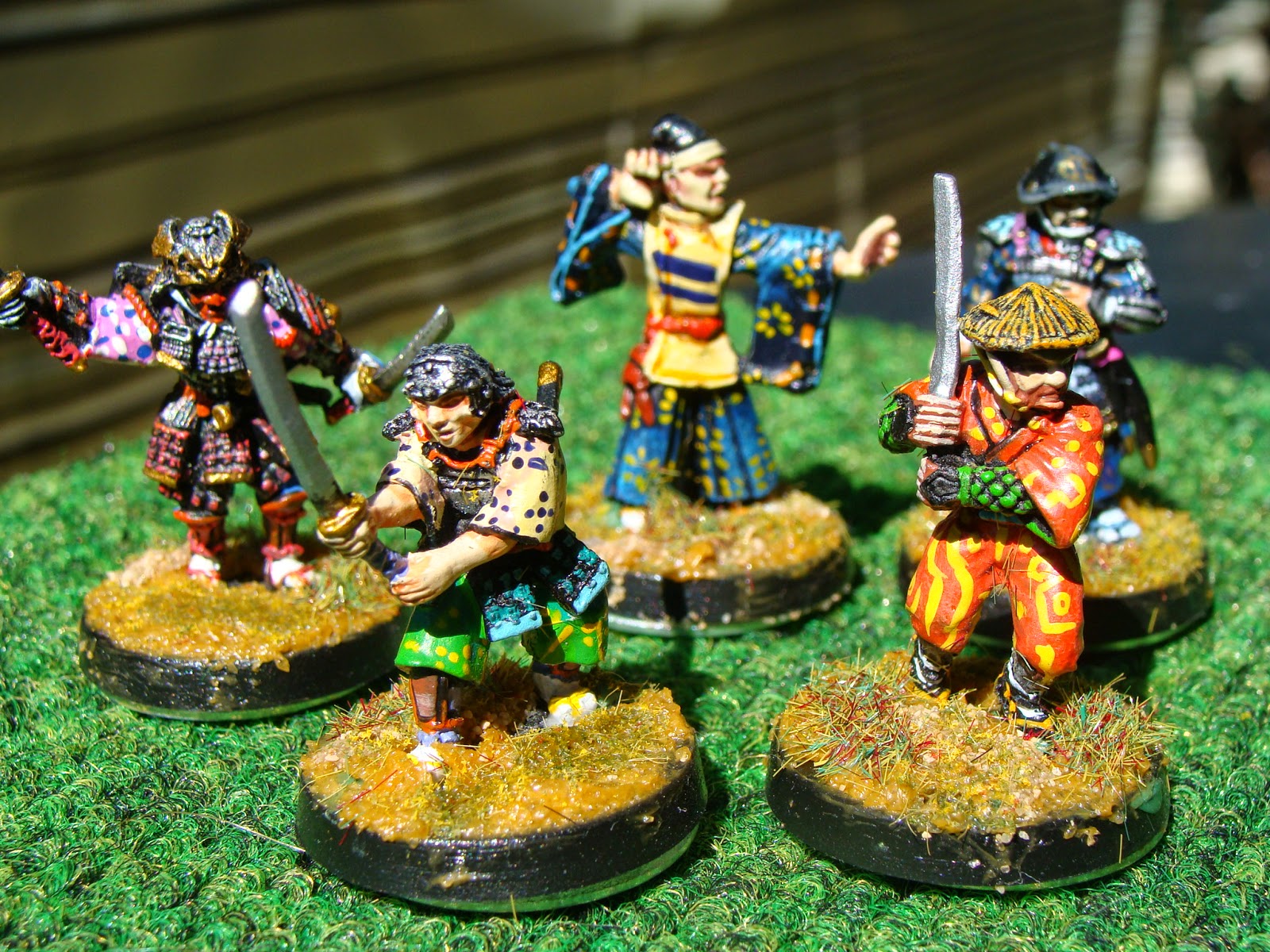 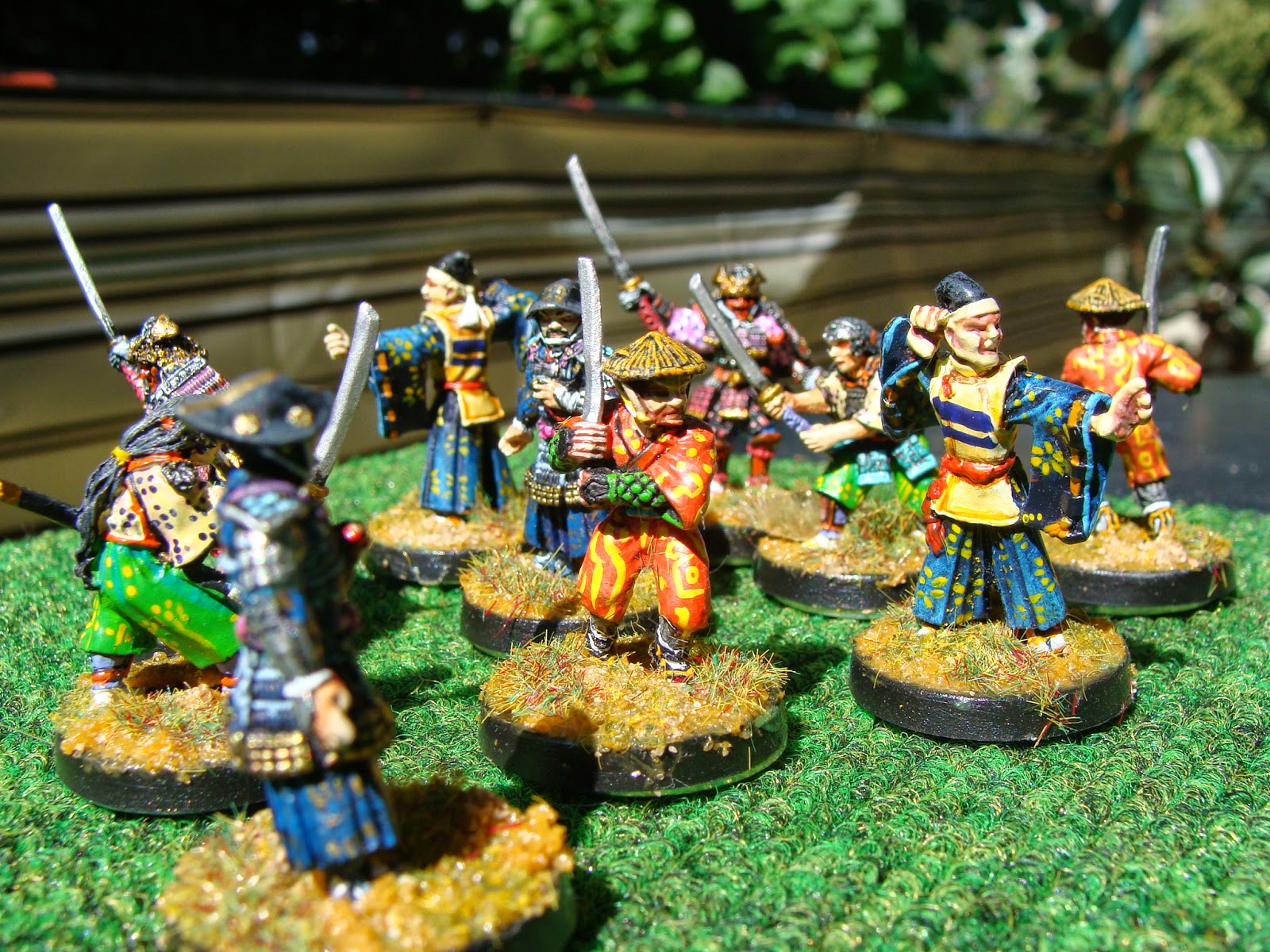 This is a repeat of  a post that I composed 5 years ago. I was going to update it yesterday, but like many Canadians I was sidetracked by the tragic events in Ottawa.  My condolences go out to the family and friends of Cpl. Nathan Cirillo.

My name is Robert Earl and 70 years ago last night that a young man of 21 was killed in action over the skies of Germany. Earl William Bock was one of my two namesakes, my grandfather Earl the other.

The following information was obtained from Dave Stapleton of the 626 Squadron Research Project on F/Sgt Bock's last mission.

The 626 Squadron Operations Record Book RAF Form 540 (The Squadron Diary) records that F/Sgt Earl William Bock was posted into 626 Squadron with his crew on the 2nd September 1944 from 11 Base. F/Sgt Bock was the Rear Gunner in the crew and flew 11 operational sorties with the crew.

On the 22nd October 1944 the crew took off on their 11th operational sortie in Lancaster LM689 UM-N2. The task on this sortie was mine laying in the Kattegat area and only two 626 Squadron Lancasters were detailed to fly on this operation; they were part of a force of 20 Lancasters and 19 Halifaxes. The aircraft took off at 16.27 hrs.

At 20.21 hrs on the homeward bound leg of the sortie the aircraft was attacked by an unidentified enemy aircraft at close range from below and dead astern. The Mid Upper Gunner fired 100 rounds in the direction of the trace (tracer bullets from the enemy aircraft) and he observed a long burst from the rear turret before the Rear Gunner F/Sgt E W Bock stopped firing. It was later found that F/Sgt Bock had been killed by cannon fire from the enemy aircraft.

The Lancaster was riddled with 19 x 20mm cannon shells along the length of the fuselage, the port aileron had been shot away and the intercom was unserviceable. The bomb doors had also been blown open. The aircraft made a safe landing at RAF Woodbridge on its return.

My father was a tail gunner on another Lancaster of 626 SQD and often wondered why he made it, while others like his friend Earl did not.

So this Remembrance Day, during the two minutes of silence please give thoughts or a prayer to a memory of a young man whose life was cut short so long ago, and for another who was senselessly gunned down at the Tomb of the Unknown Soldier yesterday.

Earl Bock's name is displayed on page 252 of the World War Book of Remembrance on May 27th each year and or may be visited at the Canadian Virtual War Memorial. 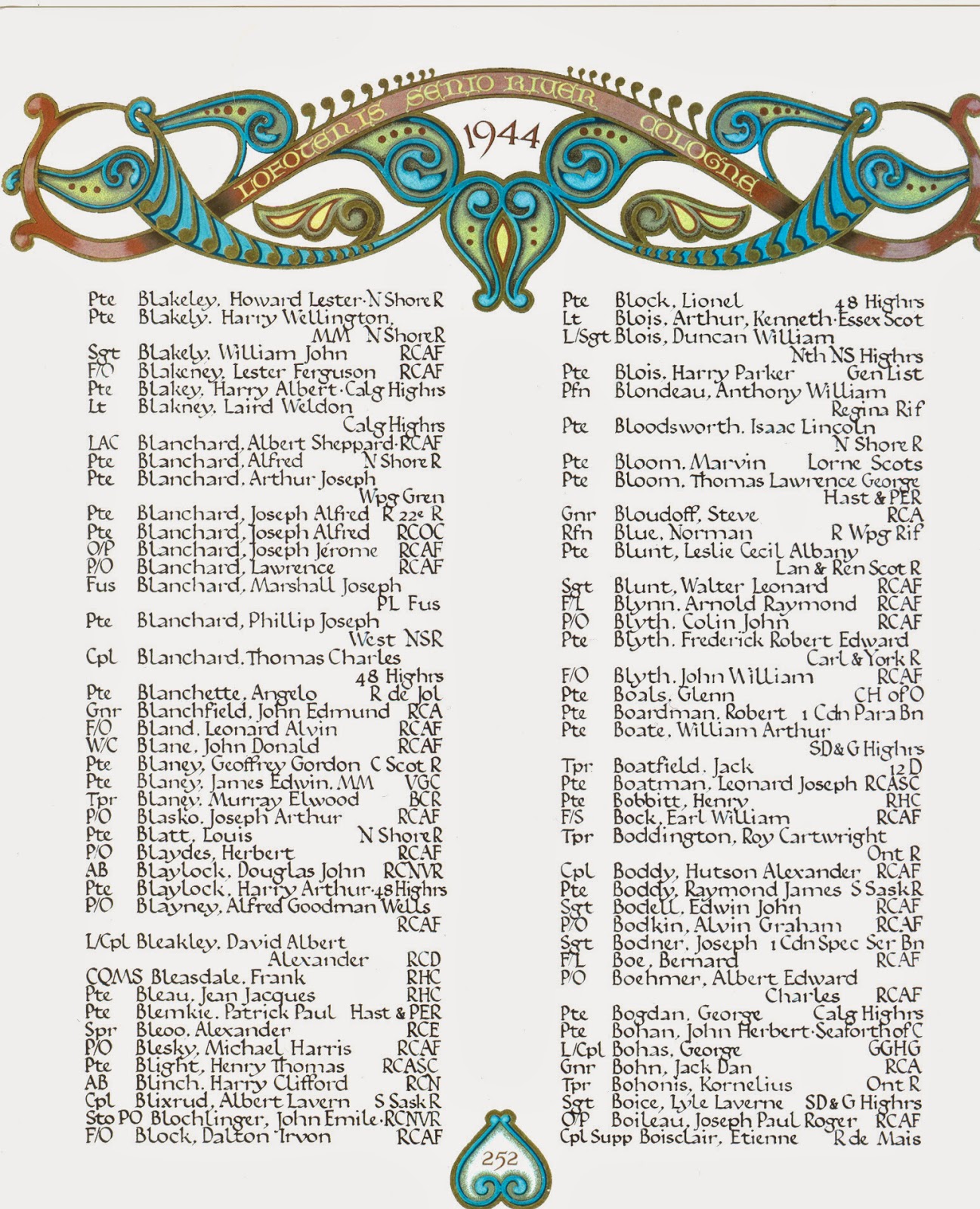 There Be Dragons Part II

I attended Cangames 2014, in Ottawa during the Victoria Day Weekend last May. I hope to post more about the event in upcoming days. However I found a miniature that I've have been on the lookout for ages. That is an inexpensive dragon for 15mm Hordes of the Things.

And this is what I found for $5.00, already painted. It was covered in dust and sitting in a bin of old minis and parts. I think it was something put out by Games Workshop for their Warmaster/Battle of Five Armies games, but I am only guessing. If you can identify the figure, please let me know in the comments. 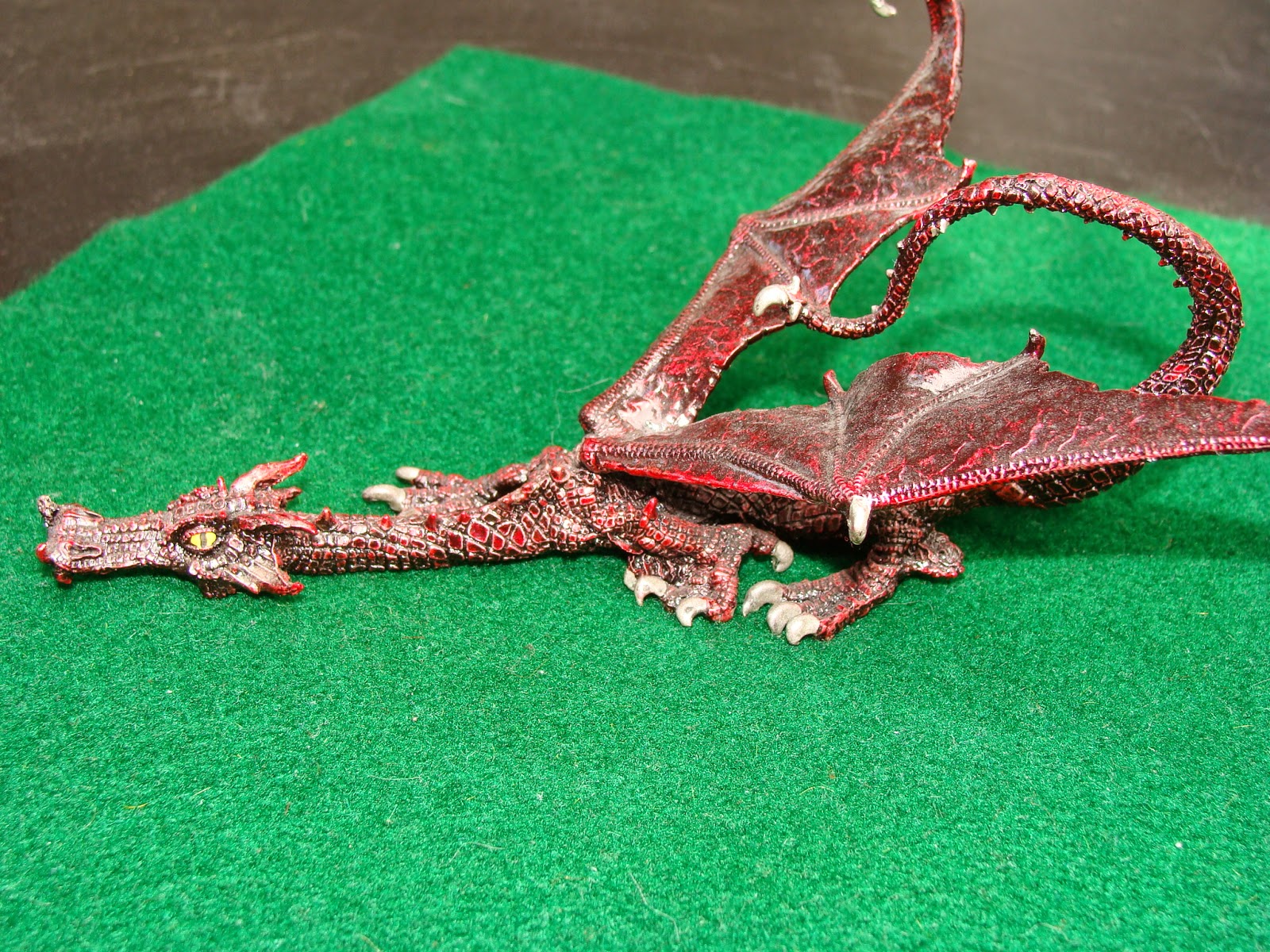 Tim, see comments below, has identified this miniature. It was originally a Ral Partha product, the Golden Dragon (01-094) and is now available from Iron Wind Metals. They seem to have kept the same product number. It’s a great looking figure and not a GW product at all.
Posted by rhingley at 5:22 PM No comments:

It has been a long time since I've posted on my blogs or even painted a figure. My life was in a bit of turmoil, but things have straightened out. After five years of chronic underemployment I now find myself, as an accounting technician, very much in demand. It has been a good year. However the hobby side of my life has suffered, while I searched for steady employment, and then found it. 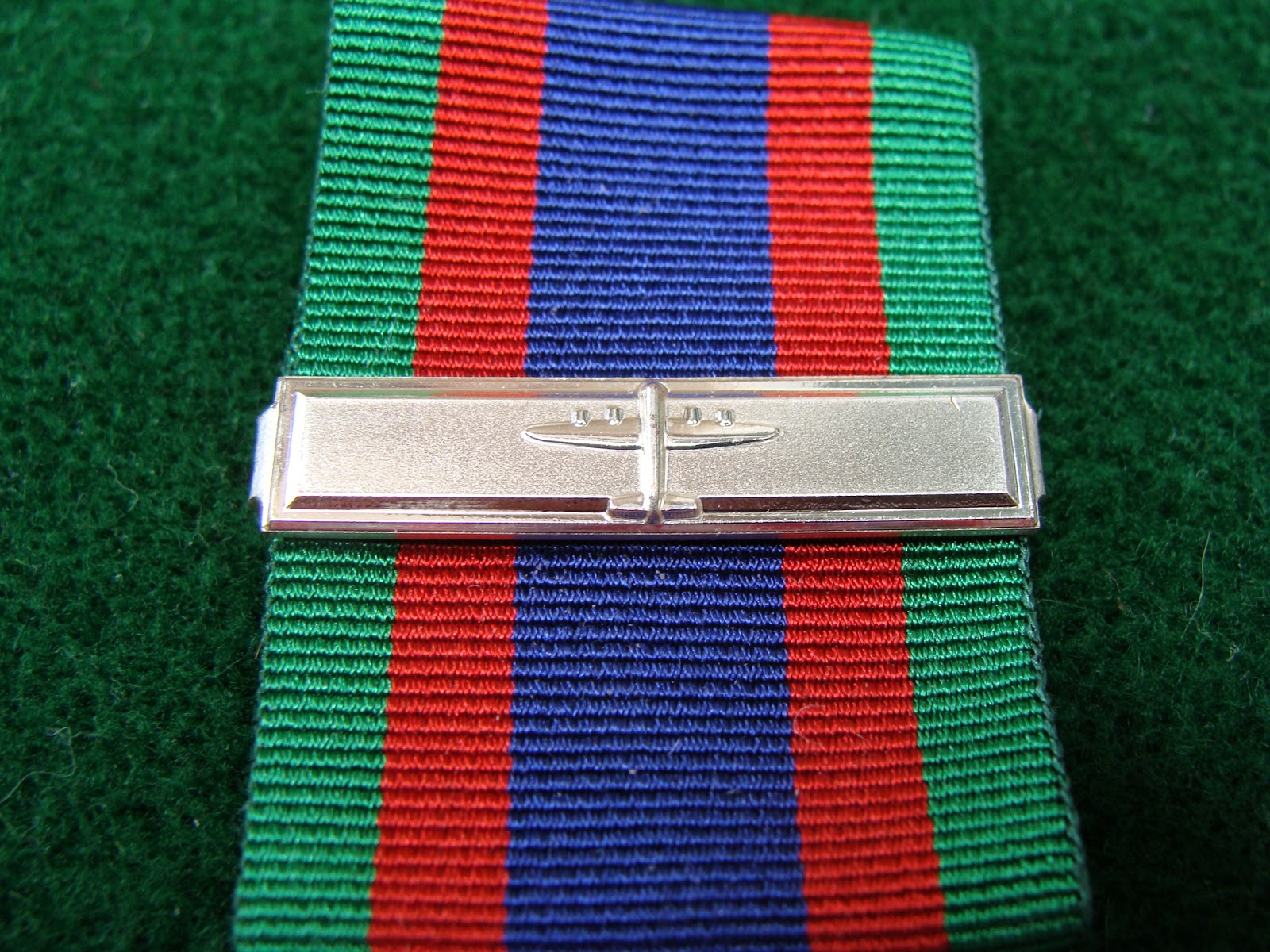 I will start off with an item that recently arrived in the mail. As some of you may know, the Government of Canada has officially introduced a new bar for the veterans of Bomber Command.  In my opinion this recondition was long overdue.

All Canadian Veterans, regardless of rank, who were awarded the Canadian Volunteer Service Medal and served a minimum of one day with Bomber Command are eligible for the Bomber Command Bar. The application for the bar can be found on the Veterans Affairs Canada Website.

My father passed away in 1995 and his medals were donated to the Royal Canadian Legion, Spryfield Branch 152. My plan is to make sure the bar gets added to them on my next trip east.
Posted by rhingley at 5:02 PM No comments: