A couple of years ago at Cangames I purchased a set of Incendiary Wagons (OGSE-11) from Old Glory. The set is comprised of one large and one small wagon full of combustibles (but No Oxen). 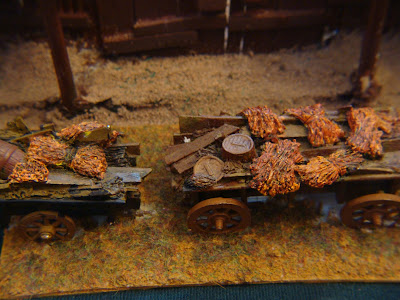 Both wagons are mounted on a single 60mm x 120mm base and are shown in the above photograph to be blocking the entrance of my home made Palisade.
Posted by rhingley at 11:35 AM No comments:

The Anatomy of a Small War Part 5

During the festive season I returned to the Soviet-Japanese frontier in Mongolia.  I picked up on eBay a HO-Ni Tank Destroyer and four 75mm Regimental / Pack Guns, all by SHQ Miniatures. 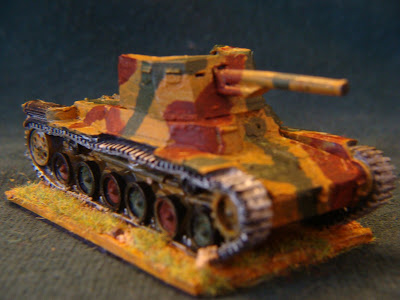 According to Wikipedia, the Type 1 Ho-Ni I was developed by utilizing the existing Type 97 chassis and engine, and replacing the gun turret with a 75 mm Type 90 Field Gun mounted in an open casemate with frontal and side armour only. The mounting for the 75mm Type 90 field gun allowed for ten degrees of traverse and elevation from -5 to +25 degrees.

The Type 1 Ho-Ni I carried 54 rounds of ammunition. This vehicle was produced in small quantities between 1941 and November 1943, until superseded by the Type 2 Ho-Ni II with its Type 91 105mm howitzer. The total number produced was only 124 units and they first saw combat in Luzon in the Philippine Islands in Dec 1944. As such, I really cannot use it in a 1939 campaign but I wanted to upgun my Japanese, with this great looking piece. 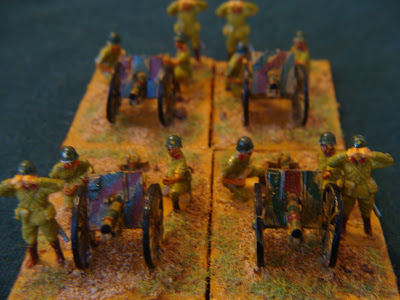 The original design was purchased from Krupt and produced under licence in Japan prior to World War One. After the war design changes were made as Japanese industrial capabilities advanced. Finally before the start of the Sino-Japanese War the final design of  what is called the "Improved Type 38" Field Gun went into production. About 400 pieces of this model were produced. The Japanese were never able to replace all of them or their earlier designs with the Type 90 75mm Field Gun. Thus the Type 38 Field Guns, though outdated, served until the end of WW2.

My complaint with SHQ Miniatures is they do not sell the guns with their crews. You have to make separate purchases. I found that Waterloo 1815, the Italian plastic soldiers manufacturer offered a box set of  WWII Japanese 70 mm Gun and Anti Tank Crews  (Number AP003) that would suit my purposes.  The figures are made of medium hard plastic, and are very easy to paint. 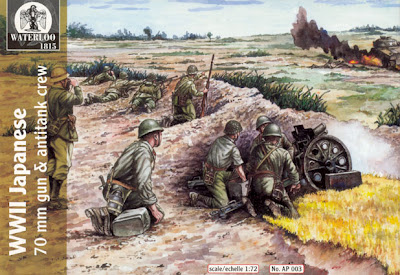 I utilised the gun crews for my SHQ artillery pieces and I also assembled the Type 92 70mm IGs and will mount them later. The guns assembled without a hitch. There is enough flex in the plastic that they do not snap when being put together. This may have been a problem if they were made of hard plastic.

Each box contains two guns and 16 figures (in 8 poses). The other figures are AT infantry or LMG teams. I have some Platoon 20 and Frontier Japanese WW2 Infantry that I need to paint. I'll add these plastics into the mix. 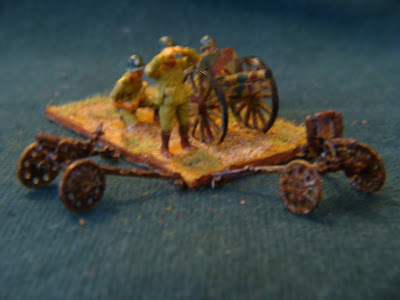 From the above photo you can get an idea of the size of the guns when compared to the SHQ artillery in the background. All models are 20mm or 1/76th scale. I assembled two of the IG guns with the gun shield and two without. I found pictures of both on the internet and I like the varity, The Type 92 Battalion Gun could fire high-explosive shells , armor-piercing, and smoke rounds.
Posted by rhingley at 3:32 PM 2 comments: