Last year Librairie Donjon, a gaming shop in Montreal, brought in a number of packages of miniatures by Warlord Games. I thought it a fine opportunity to check out the quality of the figures as well as pick up a box of Western Imperial Archers. My army already contained two units of Eastern Aux Archers (figures by Old Glory) I also purchased the Auxiliary Command pack which contains a Centurion, Cornicen, Singifer and a separate signum standard.

The following Archer unit utilized 14 of the 16 archers that came in the box. The box contained four main figure designs. These are equally divided between standing and kneeing figures. The figures appear to be true 28mm scale, are very clean and needed almost no work to remove excess flash. They were a joy to paint. I like the fact the base of each figure appears to be of about a uniform size and shape. I only used the Cornicen and the Singifer from Warlord Games on the command element. I felt the Centurion would not add to the unit’s look and substituted archers. 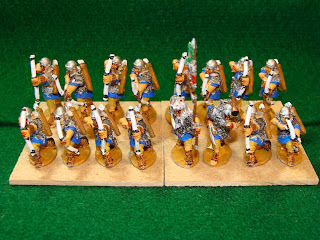 The unit below consists of 20 figures based on 5 elements. The command element is a BTD Auxiliary Command Pack at 28mm scale. The main body of men was produced by painting up two packages of Wargames Foundry IR7/8 Western Auxiliary Archers. The packs I won on EBay each had 7 figures at what appear to be 25mm scale. I then filled out the unit with two kneeing archers from the Warlord Games collection of figures. 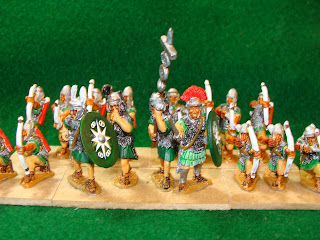 The Warlord Games Auxiliary Command pack differs from the Black Tree Design Command Pack in 3 main ways. The signum standard is a separate piece in the Warlord Games pack. I personally prefer the standard to be integrated as part of the figure. The BTD pack includes an Optio (the cohorts 2IC) as a 4th figure. The last point is the Cornicen and the Singifer of the Warlord Games figures are wearing wolf pelts, while the BTD figures appear to be wearing bear skins.

The figures are all mounted on Baccus Bases as described in the posting on Roman Auxiliary Infantry. I'd like to add that I do not think you can go wrong if you decide to add some Warlord Games' miniatures to your armies.
Posted by rhingley at 9:17 PM 2 comments:

Last month reported I only needed to paint two more units of Auxiliary Infantry, two units of western Auxiliary Archers, and a unit of Auxiliary Heavy Cavalry in order to complete my Roman Army. I have since found that I have a number of pieces of siege equipment with crew and a 2nd cavalry unit that needs to be done.

I have completed the infantry portion of this work except for the bases and felt I should report on my progress.

The first unit consists of a command element with figures by Black Tree Design (BTD) and three elements of Wargames Foundry miniatures. The one pack of infantry came from a bygone age. There were 12 figures in the package, and were almost 30mm scale as opposed to the advertised 28mm scale. I love these figures. They are easy to paint and have a real heft to them. The figures are cast as a single piece including their shield. I like this aspect of the figure. 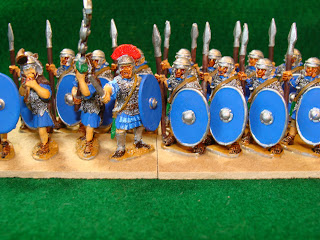 The second unit has the identical command element with figures from BTD. The figures are number IA1152 Auxiliaries Command and consists of four figures, a Centurion, a Cornicen ( the musician with the cornu), a Signifer (with a signum standard) and an Optio (the 2IC (Second in command)). These are true 28 mm scale figures. 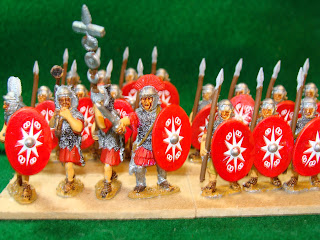 The PBI in this unit consists of 16 figures/ four elements with figures by Wargames Foundy. The figures (two packs of IR7/4 Auxilia at the Ready) have scaled down in recent years. One package contains 8 Figures, not 12 and the figures are closer to 25mm scale. The shield comes separate and needs to be glued to the figure.

The decals on the shields are by Veni Veni Vici and were originally advertised as being for Foundry figures when I made their purchase. They fit the shields of the newer/smaller miniatures perfectly. The central hole in the decal is too small to fit over the central shield boss of the older/larger figures.

All these figures have been mounted on bases that I bought from Baccus6mm but I do not find this item listed on their current website. They are 2mm thick laser cut ply and my intensions after I have built up the ground and flocked the base will be to add a magnetic base bottom by Litko Aerosystem. It is just a peel-and-stick action to add the flex magnet base.
Posted by rhingley at 5:54 PM No comments: