Last weekend when I dug out the shoebox of palm trees from the storage closet for my Vietnam photo shoot, I discovered that fully 3/4 (21) of the trees still needed to be based and painted. I remembered that it felt like a daunting chore at the time they were assembled.

The Jungle Project was quickly sidelined the first time after seven trees had been painted and based. Oh well, the job had to get done. Over the last five days (and nights), I have slowly taken 15 or so minutes at a time, to complete this project in stages. 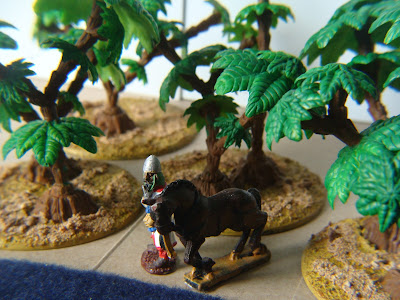 Warrior leads his horse to water, surrounded by lush vegetation.
I commenced by super-gluing one to three of the trees to each of ten plastic stands. I then applied a layer of texture paint to the bases. I then proceeded by working on 1/3 of the trees/stands at a time. First I'd paint the stands and then the palm trees. Finally I glued either sand (to four desert stands) or static grass (to six jungle stands) to complete the effect. Carried out in increments, the task wasn't nearly as bad as I thought it would be.

Actually, it's rather easy to spend 15 minutes just before bedtime on a painting project like this, and then another another 15 minutes in the middle of the night after answering a call of nature. Thus when I woke up in the morning, the stands were dry and ready for the next stage. 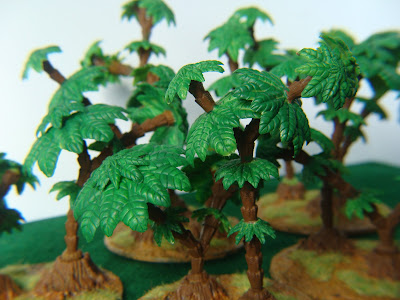 Foliage for a tropic island or the mighty jungle.
IMO these trees were one of the better deals from the people at Games Workshop. They were rather clever in the way these models were designed to be assembled in an endless variety of shapes. Unlike most plastic model trees these looked pretty good, despite being 100% plastic.
Posted by rhingley at 7:01 PM