Rob and I made our annual pilgrimage to the 41st. Cangames in Ottawa over the Victoria Day weekend participating in four miniatures events.

We acquitted ourselves quite well coming away with four certificates, a 1st and a 2nd  for Rob and two 2nd  places for me.

Had Rob had taken a dive I would have won the prestigious DBA tourney. As it stands the miserable wretch decided to play “honestly” and he is scheduled for a Q&A session with the Grand Inquisitor of the Society to account for his despicable, traitorous actions.

Saturday morning and it was “Grey Wolves at Dusk” run by David Redpath. It was a North Atlantic convoy being attacked by a pack of U-Boats. Rob was an escort commander while I was a U-Boat captain. I managed to sink 2 merchantmen (one by accident as I missed my original target and hit another ship). Rob sank one U-Boat and as the game was ending got brownie points for rescuing survivors. Meanwhile I was lining up a stern shot on an oiler and as the game ended I was asking if there were bonus points for machine gunning survivors. 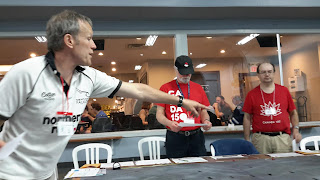 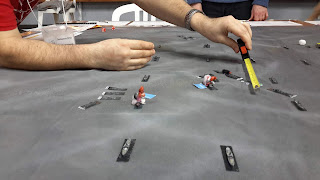 Some notes- That’s Dave running the game. The second picture you see three U-Boats…two of them are dummies for the “fog of war”. The two burning merchantmen are both my doing. Dave’s rules will be available on Wargame Vault for purchase.

Saturday afternoon was taken up with the Battle of Wihlemstahl, a Seven Years War battle, involving Archduke Ferdinand’s attempt to surround and wipe out a French army in the latter stages of the war. Rob commanded a large French cavalry force and I had a brigade of allied infantry and cavalry. I was quickly wiped out being unable to deploy properly while Rob’s misery extended some time longer. 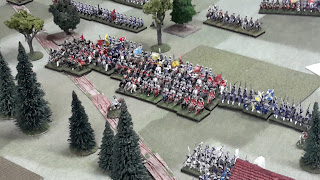 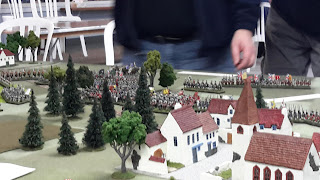 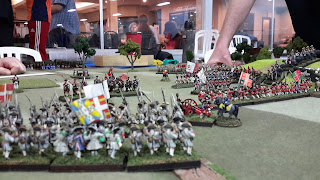 Saturday evening was Operation Market Garden Bolt Action Game where the Germans were scrambling to prevent British Paras from advancing towards Arnhem. I had command of a Stug III and several sections of infantry while Dave had several half-tracks. Rob had several sections of infantry as well as some infantry support weapons and a six pounder AT gun. David Redpath commanded our side and Rob (more or less the Brits).  By the time game ended we had our asses handed to us on a platter. We did have the satisfaction of taking out the AT gun. 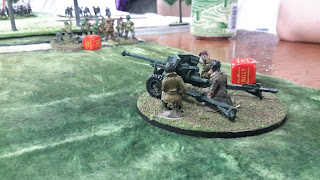 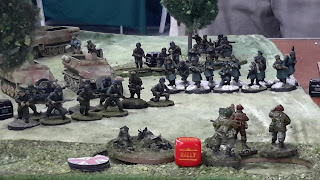 Sunday evening found us in the DBA tourney. Rob had a Seljuik Turk army and while he had promised me a Byzantine army (my favorite) somehow a couple of units had been conveniently forgotten in Montreal. I ended up with a loaner army consisting of a Classical Indian army. I blame Rob. Four rounds of 45 minutes comprise the competition with a maximum of 10 points per round being a maximum score.

I can not comment on Rob’s rounds but I can brag up my own. Now you must note that I play this game once a year and faced off against three of the best DBA players in the OMG club. By the time the dust settled and having read numerous accounts of ancient battles I had triumphed. The numerous series of die rolls of fives and sixes had absolutely nothing to do with  my wins. 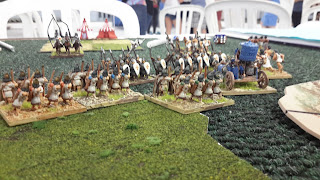 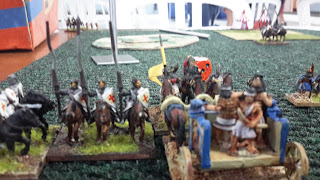 The final round was against Rob….the fix was obviously in. It was the worst army that an elephant and chariot army could face….a cavalry army. Needless to say Rob pumped up his cavalry and then proceeded to clean my clock. He needed a win with no losses and I just needed a win to go first. Well I thwarted Rob by taking out two stands before going down to defeat. As the points were tallied Rob and I had tied for second. 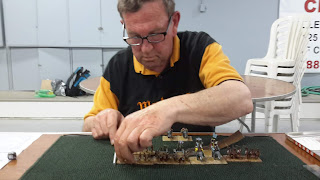 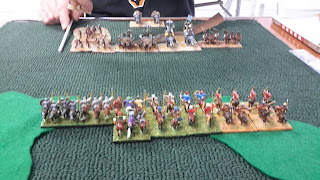 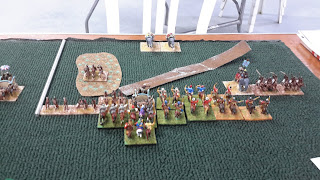 This Rob’s 15th. Year at Cangames and has placed 2nd five times in DBA. This is my fifth year and I managed a second in a competition where I should just be a filler (cannon fodder). I was totally amazed that I placed second. That will never happen again I’m sure.

A good time was had by all and I still blame “Hingley the Hun” for all of this. Thanks Rob for having introduced me to Cangames. Next year in Damascus!

Email ThisBlogThis!Share to TwitterShare to FacebookShare to Pinterest
Labels: Cangames 2018