At one point I decided that my Roman Army needed an ancient equivalent of the Army Show. According to Wiedenmann (Emperors and Gladiators 1992) "the military were great aficionados of the games, and supervised the schools. Many schools and amphitheatres were sited at or near military barracks, and some provincial army units owned gladiator troupes". 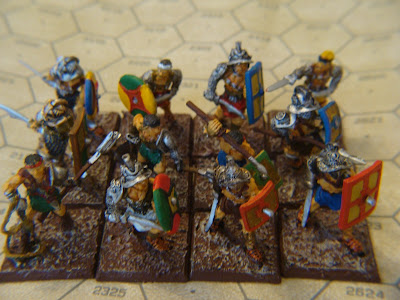 I won these twelve figures in an eBay auction, about  five years ago. I do not know the manufacturer but they were made for slot bases.  After getting them half way painted they were put aside and forgotten. (Note: March 14 Today I was looking on-line at the Gladiators sold by Black Tree Designs and I am pretty sure the figures I have are from their line)
Recently I was going through one of my storage bins and found two items to reignite my interest. The first was the SPI Ares game Arena of Death. Arena of Death was a tactical combat system for Dragonquest, the SPI fantasy RPG System.
The second was an old beat up rule booklet from the early 1980s called RVDIS, The Wooden Sword. rules for Gladiatorial Combat written by Ian Beck. Both sets depend upon a  hexagonal tactical display. RVDIS describes the various gladiators by there weapons and armour. 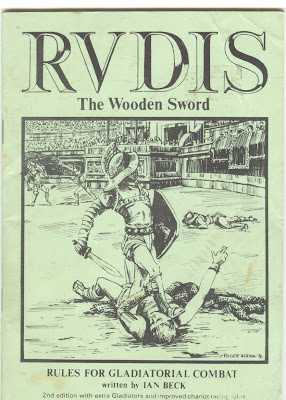 
Gladiators were typically picked from prisoners of war, slaves, and sentenced criminals. Criminals were expected to die within a year but could earn release if they survived three years. Despite the low social status held by gladiators, there were also volunteers who fought for money, and the possible celebrity status, a successful gladiator could achieve.
Who knows how much of the combats were choreographed or scripted in advance. Most professional gladiators were only expected to fight three combats per year. Alas that can not be said for the condemned criminals who fought to the death nor the helpless Christian martyrs, among others. 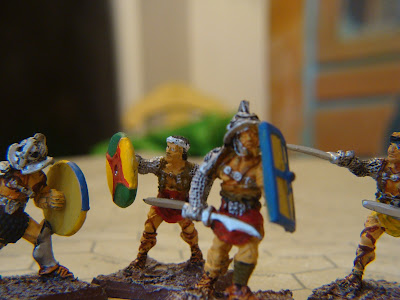 "The overall death rate among gladiators is unknown, but few survived more than 10 matches or lived past the age of 30. One (Felix) is known to have lived to 45 and one retired gladiator lived on to 90. George Ville calculated an average age at death at 27 for gladiators (based on headstone evidence), with mortality "among all who entered the arena" around the 1st century CE at 19/100. A rise in the risk of death for losers, from 1/5 to 1/4 between the early and later Imperial periods, seems to suggest missio was granted less often" (Futrell: A Sourcebook on the Roman Games 2004) 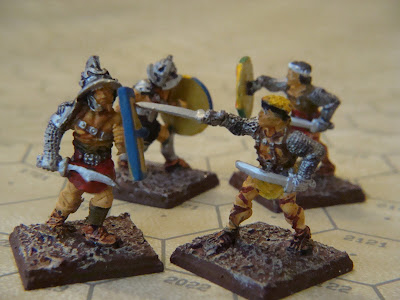 The following link has something to say on popular gladiatorial myths and the possible rates and causes of death. One argument presented here is that the death rate was caused more by injury and infections,  with euthanasia being a hammer blow to the head.

Suetonius, in the Twelve Caesars, recorded that after receiving the salutation, used as the title, at the start of a mock naval battle on Lake Fucinus that Claudius retorted back "Aut non!" (Or not!). I read somewhere that the combatants took this as a sign that they would not have to fight. Oars were stowed on the galleys and it took a threat of force to get the games to begin.

Note The Army Show was originally a CBC radio show developed in Dec 1942, featuring Wayne and Shuster. The show later toured overseas to perform for the troops.

For those who may not be familiar with Wayne and Shuster  I offer this skit with a Roman Flavour: Rinse the Blood off my Toga
Posted by rhingley at 6:38 PM