In my previous post I wrote, that I purchased a NW Frontier force that came up for sale a number of years ago. The main advantage was it was already painted and I would not have to lift a brush. That wasn't quite true. This Field Force came with a dozen pieces of artillery, lacking crew, as well as numerous pack animals. These are mostly mules laden with pieces of dismantled artillery. They still have to be painted. The artillery crews, were blogged about last year. 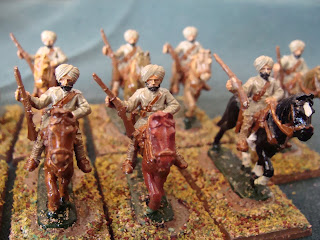 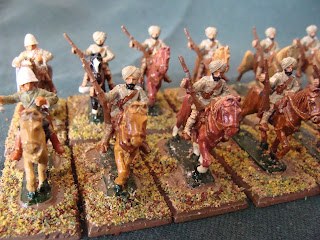 Mounted Native Troopers (15 Figures)
In ﻿addition to the unit of 14 mounted troops, there were three units of native infantry. One unit wearing red tunics, with painted turbans (20 figures) and two units dressed in khaki drab. One unit consisted of 24 figures and the 2nd of 20 men. Twenty is  the traditional unit size for TSATF (the Sword and the Flame) rule set, as well as the unit size that was chosen for the Soldier's Companion  (Space 1889 Miniature Rules). 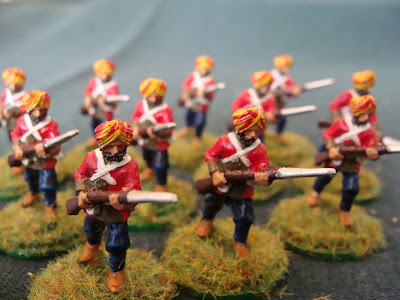 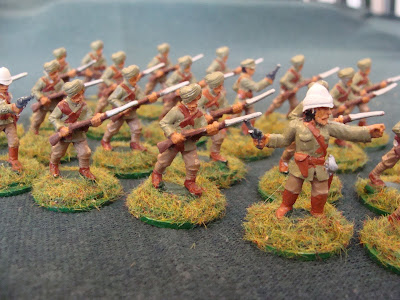 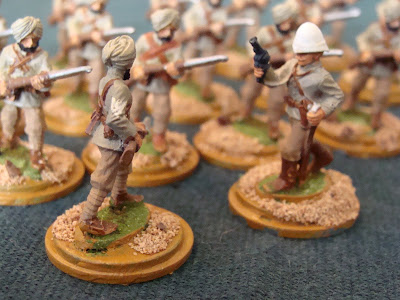 Khaki Drab, Unit of 20 in Line (3 Deep)
Native Sepoy Troops
Since I had the colonial army on the table, it was time to finish the bases of all the infantry units. That way I can "claim" the project is complete. Origanally, the infantry figures were  mounted on government issued metal copper disks. Even the native calvary figures were glued to two. Their outline can be clearly seen through the flocking, on the GF9 magnetic bases.

I found the copper base to be slightly smaller than I liked. I also wanted something that would attach itself to the flexible magnetic sheeting I lined the floor of the tool box with. The infantry was then glued to 1 inch, steel washers. Canadian Tire sells them by the hundred at a very reasonable price.
Posted by rhingley at 10:04 PM