The War of the Ring: Fantasy Flight Publishing

In 2004, Fantasy Flight Publishing published the English version of War of the Ring, an epic board game experience based upon the works of J.R.R. Tolkien. The game was originally designed and printed in Italy. It includes a beautiful hard backed map and comes with numerous thick playing tiles. Generally speaking, the game mechanics are driven by the play of cards.

In addition, the heroes and Armies of Middle Earth are represented by plastic miniatures. On the whole they are rather drab. The forces of darkness are represented by red figures and the free peoples of the west by blue figures. Leaders and personalities are a dull gray. We can go back to AH Blitzkrieg to have the units of Great Blue vs those of Big Red.

At Cangames I saw the game played where the forces of the various factions of middle earth have their bases painted a different colour to help ease the marshaling of forces.

In my opinion, the most disappointing figures are the Nazgûl, ring-wraiths mounted upon their flying beasts. The figures are both hopelessly out of scale to the other figures in the game, because of the size of the mounts, and are incredibly dull to look at. The final flaw with these figures is that they are top heavy and easily topple over.

Over my break I took the time to paint the Nazgûl and add a metal weight to the bottom of the figure to add stability. This is what they now look like. 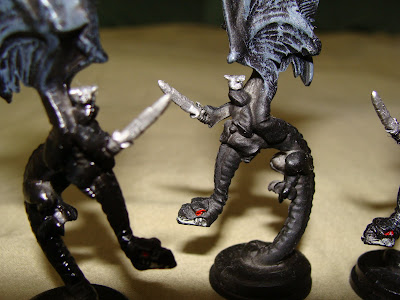