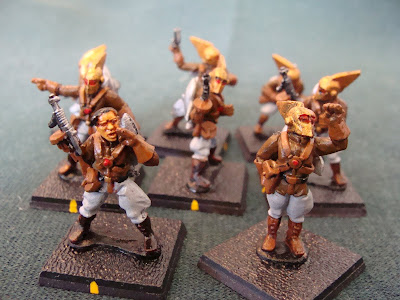 The figures will make a great addition to my Daredevil Adventures if I ever start to run it again. As well, it is an excellent unit for any WW2 skirmish game, and I'd suggest that they can easily replace a unit of paratroopers or commandos on the table. I divided my figures into two 7 man squads, lead by a 15th figure. 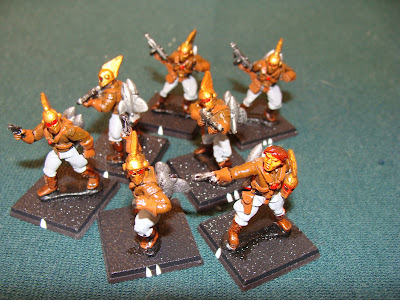 2nd Squad looks like it is led by Doc Savage, Man of Bronze

IMO the figures clearly resemble a certain hero featured in a mid 1990s Disney adventure film. I lost the 6 inch action figure, of the Rocketeer, late one night in a poker game.

The five flying figures are painted but I still have to mount them as aerials. These figures bring back memories of the late 1940s Republic serial action adventures King of the Rocket Men, as shown on television in the early 1960s on a local Halifax kids show, called Firehouse Frolics.
Posted by rhingley at 6:43 PM