As previously blogged, last May at the Cangames DBA Open Book Tournament I placed second and won an Essex Miniatures Nikaian Byzantine (IV/31) army pack.  Patrick Laffey provides an excellent commentary of the tournament from the POV of the Chanca (IV/70) Commander in the September 2010 issue of Slingshot (No. 272), The Journal of the Society of Ancients. In the article, I was one the four opponents he faced in the competition. 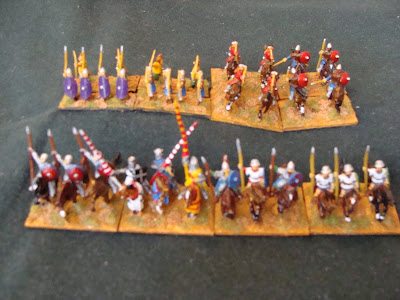 Nikaian Byzantine Army
With Cangames rapidly approaching I felt I should open the package and make the army battle ready. It will accompany my troops to Ottawa next month and will be made available as a loaner. As per DBA 2.2 the army consists of just 12 required elements, represented by Essex Miniatures by the following figures. 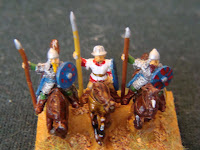 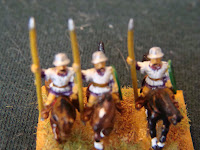 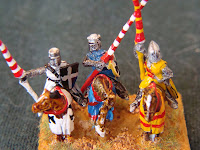 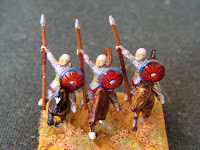 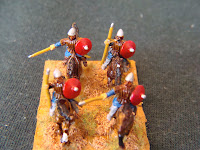 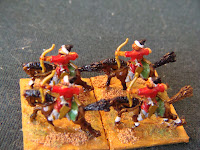 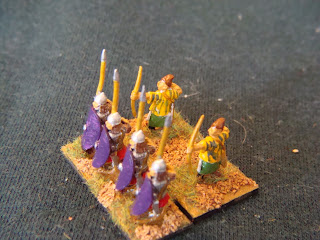 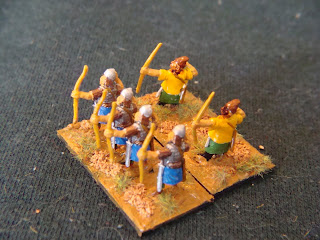 1x 4Bw            4 BZA26 (with Psiloi rear rank)
2x 2Ps              4 CRU32 (See above photos)
David Kuijt provides justification for expanded army lists for a number of the Later Byzantine Armies.
His variants may be found at Medieval Armies DBA Page
Later Byzantine Armies: DBA 153 Army Variants
With those comments in mind, I purchased another 19 infantry figures which fellow blogger Sean of,  I was a Teenage Visigoth fame had offered for sale. Check out his blog .
Posted by rhingley at 12:04 PM