I'll begin this posting with some light entertainment by the Muppets about our fun loving Norsemen.

While I was painting my Seljuk Turk DBA army I thought I could kill two birds with one stone. Every time I dipped a brush into paint for the 15mm figures, I would use the same brush and colour on a larger scale figure. I looked around and saw that I had a clear plastic storage box with a collection of Wargames Foundry Viking figures already cleaned and primed. I won them on eBay about 5 years ago.  In total there are about 80 Figures and I thought that I would work on a quarter of them at a time.

Since I prime my minis usually with 4 or 5 foot 28mm figures on a craft stick at a time I figures that this was more a more sensible approach then trying to paint 80 large figures at once. My attention does wonder, especially in summer. Like much of the northern hemisphere in Montreal we experience our first real heat wave of the summer. With the humidix the temperature was in the mid-40s C most of a week. It’s hard to paint in that type of environment.

Recently I was checking out the troop types needed for a Viking army due to my recent 2nd place finish at Cangames and the resulting prize. The 80 Foundry figures should provide enough figures for a DBA Viking Army. The Foundry Figures are just too chunky to base on the standard 20mm deep element. So this army will be fielded with Blades with a 30mm depth

Some Other Odds and Ends that were also Painted 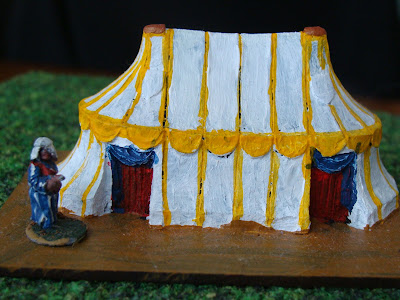