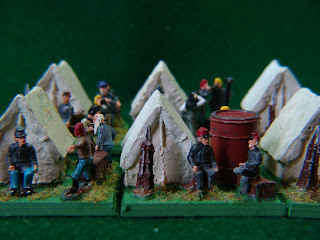 15mm Stone Mountain Miniatures CSA Camp
http://www.historicalminiatures.com/smm.html
The other day I dusted off my CSA toolbox and assembled the ragged hordes that answered the call for a 2nd American War of Independance. I lined up some figures to obtain a photographic portrait of a manned defensive position. I wanted to take pictures of the 15 mm gabions that I had just painted.
Afterwards I embarked to add Litko magnetic underbases to my entire rebel army. I had put off the job for a while, being afraid that I'd want to rebase the entire force. That was not to be the case.
http://www.litkoaero.com/mag_bots.php
I also decided that it was time to change the look of my camp. Before the troopers were mounted on pennies and the tents were loose. I adopted the DBA/HOTT standard 40 mm x 40 mm element as the optimal for a tent. I had six remaining Gale Force 9 magnetic bases  left in my collection and felt project could use them. 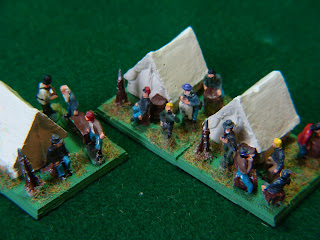 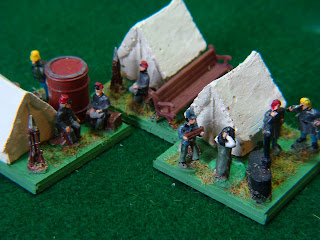 The Stone Mountain Camp provided six resin tents and numerous figures in a number of different poses. Figures are shown resting, working or even drinking coffee. The female figure is a conversion. A stack of rifles is in front of each tent. The set included a wood stove and campfires (not shown). In my opinon a very good deal from Stone Mountain Miniatures.
Posted by rhingley at 5:14 PM