In the early 1980s Fantasy Games Unlimited (FGU) released two of the finest (IMO) role playing games, both based upon Aftermath system. The first was Bushito, which was heroic role playing set in mythical feudal Japan. My good friend, Harris MacPhail ran a great campaign for a small group of Halifax Gamers. I enjoyed many an evening playing Bushito at Fort Robie.

I purchased Daredevil Adventures, which was role playing in the roaring 20s, I rapidly advanced the milieu to the mid 1930s to create a pre-war scenario atmosphere. I still have my records from the days I ran those games, including the Player Character Sheets as well as all the miniatures I used on the tabletop. Most of these figures were the Ral Partha ranges of the period. Some day I may go back to running these adventures.

Last weekend I decided that I would clear off my work table and work on completing some have completed projects. The first of these offerings was a group of Foundry's Deepest Africa Figures. It consisted of 4 native armed riflemen, 2 bearers and 4 female figures. 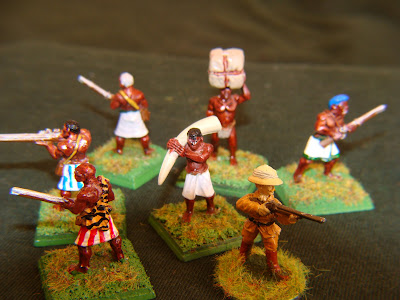 Ginger, the Great White Hunter and the Hunting Party
To this group I have added a great white hunter. It is my pleasure to introduce you to Michael "Ginger" Thockmorton-Smythe. When asked by his current (number three) wife to add a new piano conservatory to the family home, he immediately headed to Africa to obtain the ivory necessary for the piano's keys. Thus allowing himself to avoid any of the unpleasant consequences of the renovations. 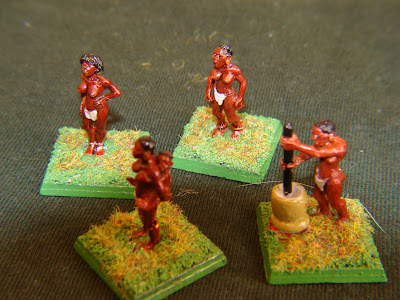 Villagers await the return of the hunting party.
Posted by rhingley at 10:44 AM